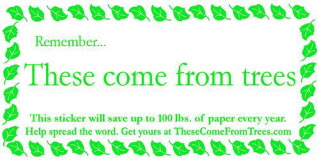 Ever grab a handful of napkins at a fast-food restaurant, or paper towels in the restroom, and end up throwing a good part of them away mostly unused? Guilty as charged. Pete Kazanjy took notice of this widespread practice one day at the In-N-Out Burger, and decided that their had to be a way to make people recognize the waste it involved. His solution: the “green guerrilla public service announcement project” TheseComeFromTrees.com. The idea behind the project is pretty simple: make people think about what they’re doing; if they do, they likely will change this behavior. According to Pete,

…this wasn’t an example of someone calling into question whether the use or misuse of a resource was “justified.” This wasn’t the same as someone saying “Wow, you shouldn’t drive that Hummer, because you have no use for it” or making some other value judgment. Any reasonable person, when asked “should unused paper goods be thrown into the trash” would probably look at you sideways before saying, “Duh, no Pete.”

That’s what was amazing about this situation. If actually made to think of about these actions, everyone would be in agreement. I think if you asked anyone in there dumping napkin after napkin into the trash if they cared about conservation and the wise use of resources, we’d all say “yes.” Of course we would. It was just that the thought process to intervene wasn’t immediate, and internalized. But maybe there was a way that it could be.

So, how do you make someone see that unused napkin as a resource? You simply remind them… at the very place they’re likely to engage in such wasteful behavior. Pete created a sticker (shown above) that anyone can place on a napkin or paper towel dispenser to make that thought process immediate. He’s asking people to join him in placing these stickers in prominent places where people are likely to grab that handful of paper: fast food restaurants, coffee shops, and public restrooms.

Yep, just put up a sticker — that’s the full extent of your guerrilla activity. If you wondering if it’s working, the These Come From Trees website claims that:

Pete’s also created a Flickr tag for photos of placed stickers: take a picture of your work, upload it to Flickr, and tag it “tcft.” If you want stickers, Pete’s got them available on his website for dirt cheap… I’m guessing from these prices that he’s not looking to make a profit.

This is a great idea that shows encouraging people to waste less really isn’t that difficult: they just have to recognize that they’re doing it. Any other projects out there that use a similar MO?