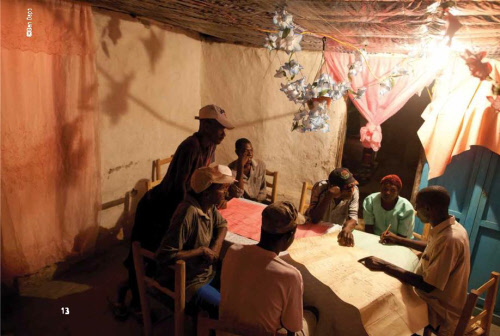 Editor’s note: Part 1 of the Harvesting Justice blog series is available here. To find all of the posts in this series (as they become available), go here.

The first group of protesters at Occupy Wall Street publicly delivered 23 complaints, outlining the ways in which corporations control our daily lives. Number four asserted, “They have poisoned the food supply through negligence and undermined the farming system through monopolization.”

How we feed ourselves and each other is the backbone of how, historically, we have organized our communities and societies. The ways in which we arrange our agricultural systems make evident our larger worldviews. Food literally and figuratively connects us to each other, to our ancestors, to our cultures, and to the earth. Maybe all food should be acknowledged as soul food (with a low bow to Southern cooking) because it is, in fact, that deep.

A movement is afoot to put food, land, and agricultural systems back in the hands of citizens. One element has long been considered the overarching essential around the world, though it is only beginning to make an appearance in this U.S. This is food sovereignty, a combination of farming practices, marketing systems, and policy choices which together allow every people to make decisions about, produce, and consume its own local, healthy, and culturally appropriate food. Food sovereignty calls for the democratic participation of the population in shaping food and trade policies. It promotes the right of small growers to have control over their land and production, to grow for domestic consumption under local control. It also promotes ecological agriculture.

Food sovereignty is rooted in the daily work of every small farmer, rancher, fisherperson, landless farm worker, and everyone else involved in local food production. Yet no matter what they produce, their ability to survive is affected by international market forces. The movement, therefore, also includes community, national, and international activists working for just trade and economic systems. It promotes tariffs on food imports to protect local markets, and an end to international trade agreements and financial institutions that interfere with the sovereignty and sustainability of food systems.

The principles of food sovereignty challenge the neoliberal economic model – basically free-trade, corporate-driven, global capitalism – that governs food systems in much of the world. Agriculture in that model demotes government and community’s planning, investing in, or intervening in food and agricultural systems. Conversely, it promotes agribusiness corporations ability to invest wherever they like, favoring the import and export of large quantities of food across borders.

The neoliberal model assumes that a low- or middle-income nation’s best option is that of fitting into the economic position allotted to it by richer countries and financial institutions. If the American Midwest can grow massive amounts of corn, the rationale goes, then it should grow corn for the world, while Colombian farmers export coffee, Brazilian farmers bananas, and so on. Along with industrial-scale farming goes monocropping and massive inputs of fuel, fertilizers, and pesticides. Much more than large farmers, the primary beneficiaries are the corporate middle people who consolidate, arrange, package, and ship the food around the world.

The proponents of this model are the World Bank, International Monetary Fund (IMF), World Trade Organization (WTO), governments of industrialized countries, large landholders, and corporations. They insist that global South countries lower agricultural tariffs on food coming into their countries so as to open their markets to foreign trade. They also pressure countries to eliminate agricultural subsidies, even though many high-income countries like the U.S. maintain large subsidies of their own. These measures undermine local production and the livelihoods of the world’s small-scale farmers who cannot compete on an uneven playing field with corporate giants.

A food system that depends on importing and exporting goods around the globe leaves everyone more vulnerable to the whims of global market forces. When oil prices rise, for example, communities and countries who can’t afford the resulting price spikes in food, or who no longer have their own strong agricultural systems in place, are left hungry.

The most powerful international coalition promoting food sovereignty is Via Campesina, an alliance of approximately 150 groups from 70 countries, representing around 200 million small- and medium-size farmers and food producers, landless people, indigenous peoples, and rural women. The coalition includes groups as wide-ranging as the Indonesian Peasant Association, the Confederation of Farmers’ Unions in Turkey, and the U.S National Family Farm Coalition. Via Campesina takes strong stands around trade and financial institutions and policies, and opposes any intervention of the World Bank, IMF, and WTO on questions of food and land. For each critique, the coalition advocates specific alternatives. Via Campesina provides a network in which groups can work together on global campaigns, international days of action, country-specific mobilizations, public education, and demonstrations at prominent venues such as climate talks and WTO meetings.

Another important grassroots force for food sovereignty is the Latin American Coordination of Rural Organizations (CLOC by its Spanish acronym), whose members are both farmers and farmworkers. CLOC represents the Latin American branch of Via Campesina, but it also takes independent positions and actions. CLOC pursues its vision of a future without hunger through three primary campaigns: challenging free trade agreements, promoting agrarian reform, and creating food sovereignty. More recently, its focus has expanded to oppose biotechnology. CLOC members develop their political program through lobbying, popular education, protests, mass mobilizations, international campaigns, and international tours.

Next page: What can you do to support food sovereignty locally and globally?