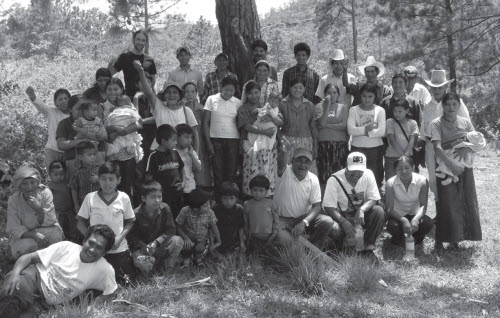 Part 26 in the Harvesting Justice series.

“Honduras has been known for two things only: being a military base for the [contra] attacks on the Nicaraguan revolution, and Hurricane Mitch.” So said Berta Caceres, co-founder and general coordinator of the Civic Council of Popular and Indigenous Organizations of Honduras (COPINH by its Spanish acronym). COPINH is an organization of hundreds of communities of Lenca indigenous peoples and small farmers.

The rest of the story, of the resistance of land reform and indigenous movements, what is at stake, and the source of much of the violence, are largely unknown in the US.

Multinational corporations are moving into Central America to exploit gold and other minerals, rivers, forests, and agricultural lands. One area of high interest in the corporate feeding frenzy is the indigenous Lenca region in the southwest of Honduras. The government has given outside businesses concessions to dam, drill, and cut, in violation of national law and international treaties. More corporations have simply moved in on their own.

The most pressing issue now affecting Lenca lands is a series of large hydroelectric dams which are already under construction. They are part of 41 dam concessions which may soon come under active exploitation. The concessions came thanks to a mining law passed in January 2013 by a national congress that was voted in under an illegal government that took power in the 2009 coup d’etat. The law allows for open pit mining as well as mining in populated areas, which opens the door for large-scale displacement. It limits access to public information, and allows consultation with affected populations only after the concession has been granted.

COPINH is at the forefront of a life-or-death movement – literally – for respect for indigenous territories, meaning the right of the Lenca and others to control their ancestral lands, riches of nature, culture, and identity. COPINH is also fighting for the democracy and civil rights necessary for their members to protect what is theirs, and for greater justice overall.

COPINH is now in its fifth month of an occupation which has stalled construction of one hydroelectric dam on the Gualcarque River that runs through Lenca Territory in Rio Blanco.

With the backing of the oligarchy and other elite, the government has struck hard against the group. On July 15, soldiers assassinated Tomas García, one of COPINH’s leaders. Berta Caceres and two other members, Aureliano Molina and Tomas Gomez, are being brought to court under charges of being “intellectual authors” of the anti-dam movement. At a next hearing, set for September 12, a judge will decide if there is evidence to support the charges or if they should be dismissed. At their last hearing earlier in August, the three were given alternative measures to imprisonment while awaiting the next hearing. The measures including prohibiting them from going to the site of the supposed crime – the dam occupation – and requiring them to present themselves and sign in every two weeks.

For years, government forces and corporate-paid death squads have been imprisoning, threatening, terrorizing, following, and falsely accusing COPINH members and other social movement activists. The government has even used basic social services as a tool of expropriation, manipulating access to health care and education to pressure indigenous communities to allow extraction on their lands.

During a recent call we made to Berta, she said she couldn’t talk just then; she was underground, having learned that the military had dispatched soldiers to capture her. “The community has been tremendous,” she said. “We’ve been receiving so much support, thousands of signatories to the action alerts, so many people at the demonstrations. We’ll be fine… as long as we don’t end up in prison.”

Berta told us, “We have a chant that we’ve really taken to heart. It says, ‘They fear us because we’re fearless.'”

The fearlessness has paid off. Over the years, COPINH and others have successfully reclaimed ancestral lands, winning many indigenous communal land titles. They have stalled or stopped prior dams, free trade agreements, and mining exploration. Other advances of COPINH and its allies in protecting their lands and culture include:

COPINH’s victories have come through the size, strength, unity, and fierce commitment of their movement. Communities have participated in hundreds of protests, from their local mayor’s offices to the steps of the national congress. They have occupied public spaces, refusing to leave. They have shut down the road to Tegucigalpa, blocking goods from moving to the city. They have occupied US military bases. They have declared a boycott of all international financial institutions from their lands. They have helped coordinate dozens of local referendums or consultations.

COPINH and its allies have long realized that they cannot protect their own territories through local actions alone. They must also combat the inequity and impunity that have allowed the plunder of their resources to begin with, and change national and international policy. To those ends, they are a playing a lead role in the National Resistance Front, opposing the policies and repression of the regime. They have also been leaders in a national campaign called Refounding Space, which focuses on the need to reconstruct society with a new concept and practice of power. COPINH is also deeply involved in hemispheric social movements and in global campaigns against US military bases, World Bank, Inter-American Development Bank, International Monetary Fund, and others.

See the first two articles in our month-long series on Honduras here:
We Don’t Have Life Without Land: Holding Ground in Honduras and Without our Land, We Cease to Be a People: Defending Indigenous Territory and Resources in Honduras.

Annie Bird and Grahame Russell of Rights Action and Brigitte Gynther of School of the Americas Watch contributed research to this article.