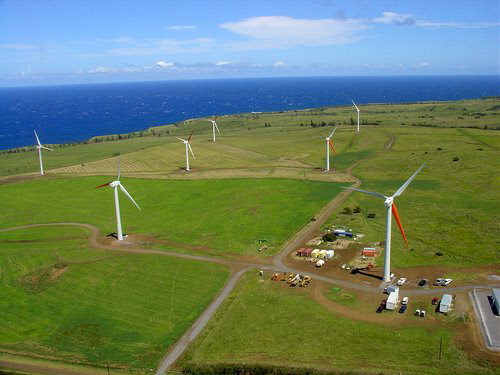 Hawaiian culture is steeped in a delicate harmony with nature. The islands boast consistently strong wind densities, great insolation characteristics, enormous reservoirs of geothermal energy, plant life that is perfect for the production of ethanol, and an incredible oceanic wave resource, all of which could be exploited by renewable technologies without damaging the environment. As Hawaii’s population continues to grow, so too will the state’s demand for energy—and where will it come from? Petroleum that already needs to be shipped to the islands in enormously expensive quantities each day? It is hard to overlook Hawaii’s potential to be a natural model for the rest of the world, a model which could prove that the combined effects of renewable technologies far outweigh their associated high initial investment.

The islands already appear to be taking drastic steps in this direction. Hawaii imports an incredible amount of petroleum each year, which, in addition to being expensive, also expels toxic byproducts into the environment. The state recently initiated a clean energy challenge with an ultimate goal of a 70 percent clean energy economy by the year 2030. While this might seem completely absurd in other places around the world, Hawaii is actually more realistically positioned to meet that goal than most other geographical locations on Earth.

Geothermal energy prospects look especially keen for the island, which was actually made from volcanoes. Doctor Jefferson Tester, a famous geothermal energy proponent and researcher at Cornell University, has made it clear through various studies, research findings and collaborations with other professionals that this renewable energy technology already has parity with solar photovoltaic and wind systems. In America and around the world, Ph.D. programs of all kinds from mechanical to chemical to civil engineering are integrating study of renewable systems into their programs. The Department of Energy continues to fund hundreds of new research projects in the green sector each year, and is currently funding many geothermal research projects in the U.S. on a large scale. Simply put, it seems like the technological, research and social viewpoints are converging in a way that Hawaii can easily take advantage of.

Politicians and cynical energy professionals often attack wind energy because air currents are erratic power sources that are unstable and incapable of providing baseload electricity. At Upolu Point on Hawaii’s Big Island, however, a 10.5 megawatt wind farm has been producing energy successfully—and consistently—for many years. It probably helps that the wind blows in this region 70 percent of the time, making Upolu Point arguably one of the best places for wind farms in the entire world. There is a reason why Hawaii is known as a great place for surfing—you can’t have killer waves without killer wind patterns to help create them. The Department of Energy published a wind resource map for all of the Hawaiian islands that clearly indicates the incredible wind resources available to the state, and many new farms are either in planning or in production. Wind energy for Hawaii? Check.

Every year Hawaii caters to an enormous tourist influx, probably because of its great tanning sunlight, rich culture, scenic views and sparkling ocean. The islands have above-average electric utility prices and get plenty of sunshine each year, which is very close to a perfect case scenario for solar photovoltaic (PV) technology implementation. Hawaii already has more solar water heaters per capita than any other state and is well on its way to utility-scale solar production. In February of this year the Hawaiian Electric Company and IC Sunshine LLC announced a joint project to create a fixed-tilt PV power production facility to be in service by 2012. Furthermore, federal tax credits of up to 30 percent are being subsidized by the Hawaiian government for residential and commercial implementation of solar systems. This is great news, especially given the high price of this technology. Of course, this is only a fraction of the state’s current solar efforts. Residential solar sales continue to grow and continue to add to Hawaii’s renewable portfolio. Solar energy for Hawaii? Double check.

If that wasn’t enough, Hawaii is surrounded by yet-underexploited ocean resources. The linear power densities of ocean waves can reach monstrous quantities during a storm, and while it’s impossible to extract 100 percent of this energy from a wave, lots of research and development is underway to improve this efficiency. Hawaii has been the site of many major U.S. Ocean thermal energy conversion (OTEC) experiments, all of which contribute to the authority of this technology. In a nutshell, OTEC uses oceanic temperature gradients to circulate energy that can used to produce electricity. Warm liquid is piped from the ocean’s surface to vaporize a liquid that can drive a turbine. This gas is then cooled using water from deep beneath the ocean to restart the cycle. In 2006, Ocean Engineering & Energy Systems announced their plants to construct two of the world’s largest OTEC plants in Honolulu, which were to go operational in 2008. Additionally, Hawaii has ample open shoreline that can be used by ocean devices that take advantage of the kinetic energy in waves. Such systems are already implemented in the UK, and it is only a matter of time before they lay their anchors in Hawaii. Ocean energy for Hawaii? Definitely.

Likewise, Hawaii has plenty of biomass resources that could potentially be used in many different ways, which is especially great news for a place with no indigenous fossil fuel reserves. According to a report done by the University of Hawaii, the island has over 67 thousand tons of waste that goes into just one of the island’s landfills. Industrial wastes and other organic materials could easily be gasified to both produce electricity and fuel as well as to eliminate some of the land area needed for landfills—land area that could be used for other things, like harvesting plant biomass. Hawaii also has a thriving sugar cane industry, which many people have eyed for the renewable production of ethanol. There are lots of drawbacks to this idea, but it doesn’t detract from the sheer diversity of biomass resources all over the island. Biomass conversion technologies for Hawaii? It’s getting there.

All in all, Hawaii seems like a place that was made by nature to be exploited for its natural resources. Especially as the U.S. and the Obama Administration ramp up their pursuit of green initiatives, it will be very interesting to see where Hawaii will end up in all the renewable chatter. It appears there is no better place in the States for the model implementation of such new, diverse technologies; it will be certainly be worth keeping an out as time goes on. Hawaii already seems to be doing a stellar job.

Jeremy Fordham is an engineer who enjoys and encourages discussion at the boundaries of many different disciplines. He is a proponent of renewable energy and distance learning, and contributes as a writer to resources promoting online education.