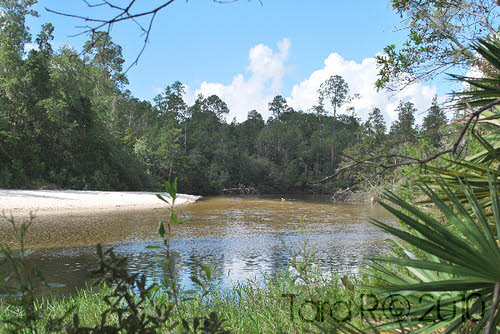 Today’s second post is also a bit unusual for us these days: normally, I leave activism campaigns to others who do it better. But we’ve all got places that are special to us, and Blackwater River State Park in Northwest Florida is one of those for me. I lived in this part of Florida until the age of 12, and have countless memories of good times on the Blackwater River: picnicking, swimming, hiking, camping, canoeing, fishing… it was a wonderful spot for just about any kind of outdoor activity.

The park isn’t just a great recreational spot, though: according to the Nature Conservancy, it’s also one of the last remnants of longleaf pine/wiregrass forest that once covered the Southeastern United States, and a hub of biodiversity. It’s a real gem in a a state overrun with thoughtless development… and now, some want to risk sacrificing it for oil and gas development.

It turns out there’s a pretty sizable oil and gas field under Santa Rosa and Okaloosa counties, and drillers want to get at it. State Representative Doug Broxson has put forth a bill – House 431 – that would allow for drilling in the state park. Milton resident Marsha Fuqua has put together a Change.org petition and Facebook community aimed at stopping Rep. Broxson’s bill.

As someone who spent the remainder of his childhood in Southern Louisiana (which I now consider “home”), I’ve seen the damage that can be done to ecosystems from oil and gas exploration and drilling. I’d hate to see this area damaged irreparably, and I definitely don’t want to see toxins from the drilling process leaching into the water and soil of this area. No doubt there’s money to be made for the state, but I hope Rep. Broxson and his colleagues in the legislature consider the value of what’s already there.

If you’ve got any connection to Blackwater River State Park, sign the petition and share your experience – Rep. Broxson receives messages about each signer. And come back and share those experiences with us…