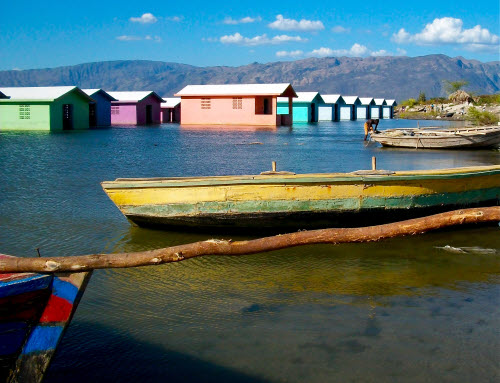 Though most of may view social media as primarily social — a way to keep up with friends and professional contacts — we’ve all witnessed its power to relay stories we would have never heard otherwise. Tools like Twitter and Facebook fundamentally changed how we experienced events like the ’09 “Twitter Revolution” in Iran, or the more recent “Arab Spring”… because we were able to read, hear, and see stories that professional media outlets would’ve missed. The affordability of the means to produce media provides many of us with the chance to tell these kinds of stories… and to show others our own unique perspective on the world around us.

Does this broader ability to share media we create have the power to change the world? Ryan Ansin thinks so. As a photographer and videographer for numerous non-profit groups working around the world, Ryan saw from a young age the power that recorded images can have on motivating people to help those in need. It occurred to him, though, that the still and moving images from places like Vietnam,  Cambodia, and even parts of the United States might be even more powerful if they didn’t come from visiting professionals, but rather from the people living their lives in these places, and experiencing the challenges of poverty, social unrest, and environmental degradation.

In 2010, Ryan changed the strategy of the company he’d founded in 2003: Every Personal Has a Story (EPHAS) Productions became a non-profit dedicated to giving people the tools to tell those stories. Specifically, EPHAS aims “to educate people in developing countries in media arts so they can self-document the life and transformation in their communities.”

Approaching his mission with the mindset of a tech entrepreneur, Ryan and the team he recruited have worked to build a replicable platform that allows for the creation, collection, distribution, and sale of photos taken by children in locations where the organization has chosen to work.  The children aren’t just handed cameras and sent on their way, though: the organization provides all of the necessary tools (including cameras, memory cards, printers, paper, solar chargers, and other needed equipment), and has created a two-week curriculum to train students in the use of the camera, and even basic photographic composition. The organization also trains a local teacher in the curriculum so that new citizen photographers can learn their skills without having an EPHAS member present.

Once the kids start sending in their photos (currently over 300 a week), EPHAS  handles the details of sorting, archiving, and otherwise getting them ready for sale. This is where the young photographers are able to contribute to their communities: a portion of the sales price of each photograph goes back to an organization working in the community. In Rwanda, for instance, EPHAS supports ONE4THREE.org, which works to ensure a consistent supply of potable water for the Karambi/Gitwe community. In Santiago, Dominican Republic, the group works with Youth Rising, “a program dedicated to teaching leadership skills to young people as they participate in fun arts and athletic activities.”

So, what kind of photographs come out of this effort? That’s one above… head over to the following pages (links below) to see more examples of the photographs taken by EPHAS’ students, along with the stories these images represent (as told by EPHAS staff). Each of these photos is available for purchase in the EPHAS gallery.

Story for top photograph: Joseph Enoise, 18 years old, captured this image in Fonds Parisien, Haiti, a few short miles away from the border of the Dominican Republic. Étang Saumâtre, the largest lake in Haiti has been steadily rising for the past six years due to a blocked tributary, forcing locals to abandon these houses and rebuild less permanent structures further away from the water. Enoise lives two kilometers away from the lake at what is now called Miracle Village with his family.