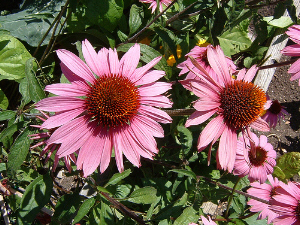 Editor’s note: Last week, we published a piece by our editorial intern Oscar Cardenas on the endangered status of many herbs used in alternative health practices. Today, we’re pleased to give you Oscar’s second piece on the subject, which focuses on the popular herb Echinacea.

Imagine an organism, native to the American prairie, whose value to people prompted wholesale hunting to fill the demands of a niche market. In the period of roughly a decade and a half, consumers managed to rediscover and exploit natural reserves of this species which had originally been utilized by Native Americans in the eastern United States. The organism, echinacea (not the American bison), consists of 9 species of plants, some of which are recognized as endangered by federal and state authorities.

What Is Echinacea and How Does it Work?

The blanket term echinacea usually refers to three species of this plant: Echinacea angustifolia, Echinacea purpurea, and Echinacea pallida. All three varieties are native to North America and are often packed into individual or homogenized mixtures that are marketed as immunity boosters and touted to either prevent colds or lessen their impact/duration. Echinacea can be used preventatively or post-exposure to shorten the duration of colds when the rhinovirus (the cause of the all-too-common cold) has invaded and incubated, causing symptoms (the sniffles). Doses are delivered orally and come in the form of tinctures, pills, or drinks with intake instructions specific to the product listed within the packaging.

The active components have yet to be identified but echinacea is believed to improve immune defenses by stimulating lymphocyte activity. Lymphocytes are the white blood cells that fight disease-causing pathogens by identifying, marking, and “eating” them. Additionally, echinacea appears to increase interferon levels which interfere with the reproduction of viruses like the rhinovirus.

The Market for Echinacea

The demand for echinacea was extremely high around the close of the last century. Echinacea sales totaled some $300 million a year in the late 90s; however, these numbers have since dropped to around $150 million a year. According to the Nutrition Business Journal, 2006 saw a drop in echinacea sales with $129 million-worth sold in the United States. Theories abound as to the potential reason for a dip in sales of late including a reported lack of effectiveness and the presence of other remedies (goldenseal, vitamin C and zinc combinations, etc).

I believe that high demand for echinacea will resume. The most recent study published in July 2007’s The Lancet Infectious Diseases concluded that taking echinacea reduced the risk of catching a cold by 58%. Additionally, it lessened the duration of colds by an indefinite amount (couldn’t agree on that one, I guess).

Humanity has done a good job of learning from the past. Due to the diligent efforts of the American Bison Society, the buffaloes are once again roaming parts of the central U.S.. Likewise, wild endangered echinacea plants are protected in states like Florida, Michigan, and Tennessee. A rigorous monitoring system set up to protect wild echinacea plants would be well-advised before the next surge in demand (October through April, roughly). In the meantime, seek out and patronize dealers that practice sustainable agriculture.

For further reading on endangered/protected animal and plant species, go to:

The US Deparment of Agriculture
The US Fish and Wildlife Service

Image credit: bcballard at Flickr under a Creative Commons license