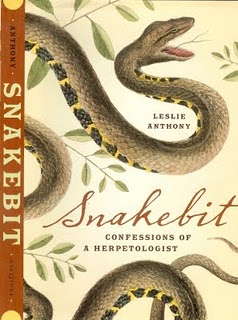 Author’s Note: A free review copy of this book was provided to me by the publisher, Greystone Books. Like all of their titles, the book was printed on acid-free, 100% post-consumer recycled paper without chlorine.

Just reading the title of Leslie Anthony’s book Snakebit: Confessions of a Herpetologist (affiliate link) may send shivers up your spine and produce beads of sweat on your forehead. Few things in the wild world of nature have caused humans as much instinctual anxiety as all things “herp”: snakes, frogs, newts, salamanders, crocodiles… You know, the talking snake praising the virtue of certain fruits on a certain tree (the Bible), an ageless devourer of light and goodness (Egyptian mythology), a cosmic dragon from which all things were formed (Sumerian mythology)… You get the idea.

But Leslie Anthony is out to convince you that he, and others of his ilk, are not really bonkers because they love slimy creepy crawly things with fangs and toxins and seriously bad attitudes. Not only love them, but actively seek them out, braving myriad forms of injury and premature death to see them, capture them, classify them, and know them.

Anthony holds a PhD in zoology and is an accomplished travel writer, so he knows his subject intimately and has an ability to sing its praises with well-crafted prose. Plus he has an irreverent sense of humor, which makes for an odd yet remarkable result: a book that is steeped in scientific minutiae and yet thoroughly enjoyable for nearly any lay reader. Well, except the ophidiophobes, of course.

The Critters and the “Herps”

His book is a slithering narrative that introduces readers both to the animals and to the various wild human characters of herpetology, personalities as colorful and (yes) odd as anything they go hunting after. There is “Dr. Bob” Murphy, whose every adventure involves beer and knee-jerk snake handling, and who is the genius behind a herpetological rock opera. Or some fellow possibly named “Stuart,” who laughs off juggling deadly snakes in Fiji. Or the score of “geeks” who bicker at conferences and erupt in drunken rages in museum gift shops.

All of the people we meet in Snakebit are, like Anthony, clearly “snakebit”–and not just in the sense of having been physically bitten by snakes (though most definitely have, of course). They have been “snakebit” in the other way, namely in the sense given the term in the southern U.S., “where it denoted someone either specifically predisposed to bad luck or, more generally, cursed in a way that alluded to an insidious lifelong burden” (258). The main symptom is an obsession with lizards and reptiles and so forth, “Not the desire to possess the organism but desire to possess knowledge of it. They want to discover these creatures not to collect them so much as to understand them better and the long evolutionary line(s) they are part of.

As we ride along with Anthony, through every climate and imaginable landscape, we also learn much about the passion that drives scientists, a love that can carry them through obstacles like armed banditos in Baja California, malarial mosquitoes and leaping rats in Vietnam, and every possible degree of heat and cold. And hangovers.

A Herpetology Book that Combines Science, Commentary …and Style!

The best part of Anthony’s scientific travelogue-cum-autobiography is how he recounts these harrowing tales with perfect aplomb and laugh-out-loud wit. An example, when he is describing the dangers of sleeping in the open in the desert: “The problem was the million of other creatures bunking there–mostly pointy, piercing, poisonous ones. If you added the thorns, spikes, needles, hairs, and noxious secretions of surrounding plants, the decor was definitely on the dodgy side of dangerous. Not exactly feng shui” (139).

But Snakebit is also extremely revealing when it comes to matters of environmental health, biodiversity, and sustainability. The animals that Anthony and his fellow “herps” study are some of the most sensitive on the planet. Pollutants, climatic changes, habitat destruction…slight alterations in the ecosystem from these and other factors can wreak havoc amongst lizards and reptiles. Whether it be frogs with extra limbs or sudden reductions in a newt’s population size, discussions of herpetology also inevitably reflect the health of the planet.

Anthony confronts this reality throughout Snakebit, even if he only discusses them at length during particular moments. He recognizes that so many of these animals, such as crocodiles, “are endangered, and it’s sad to think that we–soft, pink, bipedal mammals–might wipe out a group that withstood the lengthy onslaught of the dinosaurs and survived several global extinction events” (185). Thus we run into the many threats these creatures face, all of which have a common cause: human behavior. It adds a level of sad, stark reality to the otherwise self-enclosed scientific data and the saucy humor.

Getting Bitten (or Not) by Snakebit

In the end, Snakebit will not be a must-read for most people, including those who can get beyond an instant repulsion at the title and book cover (with, you guessed it, a gape-mouthed snake illustration). Anthony’s scientific background frequently leads him to go into myopic detail, with scientific names and taxonomic distinctions that will make many readers’ eyes glaze over. And he rarely helps us to place ourselves in time with direct references to dates; usually all we get is “when I was…” or other oblique references to events in his life, themselves not firmly grounded in chronology. That makes it hard to form a larger narrative. He always seems to be in his mid-twenties, the fiery grad student seeking adventure and knowledge.

Of course, with his brilliant sense of humor, Anthony seems like this sort of impish upstart no matter his age or the place in his narrative. This true gift with “data management” and a strong, articulate voice help make Snakebit both fun and enlightening for anyone interested in herpetology, its creatures of study, and even evolution; other readers can enjoy it as well, not just the specialists. Plus, whether or not you would admit it, it will make you laugh. A lot. Moreover, it is a book you can feel good about buying, since Greystone Books publishes books on forest-friendly paper to reduce the impact on the environment.

Still, with all that Snakebit has going for it, it probably will not make you want to become a herpetologist. But maybe, just maybe, you will think twice before you kill the next snake you find in your yard. At least I hope so…

Even if you don’t like snakes, you probably do love the outdoors. Check out our current listings for camping gear, solar cookers, water bottles, crank flashlights, and more in the Green Choices product comparison engine.