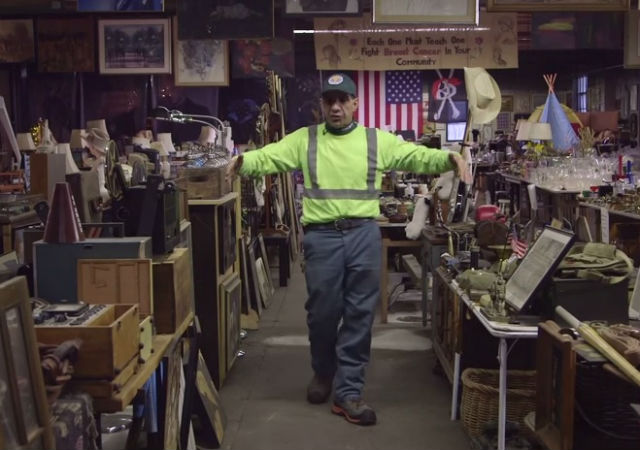 If you follow online dumpster diving communities, like those at Facebook and reddit, you’ll see lots of pictures of the treasures divers find… from massive amounts of edible food to electronics still in its packaging to unworn clothes that have yet to go out of style. Yep, people throw away lots of things that still have plenty of use in them. In fact, some people even make a decent living selling the stuff they find in dumpsters.

In the Big Apple, sanitation worker Nelson Molina has been collecting interesting, useful, and even historically significant items that often pop up in a New York dumpster. Old movies (and projector on which to show them), typewriters, sports memorabilia, photographs… Nelson’s found all of these things in the trash. Over the decades, he’s curated a collection of this “trash” on the second floor of East Harlem’s Department of Sanitation garage into a museum of the things New Yorkers have sent to the landfill.

Of course, Nelson’s collection and arrangement of these materials highlights the cultural and historical significance of these things that people decided no longer had any value. If you’re a dumpster diver, what have you found in the trash that might be museum-worthy? Or, if you’re feeling the need to confess, what have you thrown away that might have such significance.