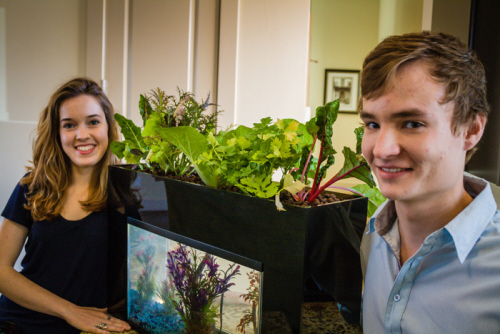 Got a 10-gallon aquarium laying around in the basement or garage? The detritus of a failed attempt at adding tropical fish to the home decor? Austin, Texas college sophomore Jack Ikard found one in the back shed a year and a half ago, and decided to see if he couldn’t turn it into an indoor aquaponics system. After lots of tinkering, much of it at laser cutting co-op MakeATX, Jack came up with a prototype, and began showing it off at local food co-ops, farmers markets, and even last Fall’s SXSW Eco.

Thinking he had a viable business idea on his hands, Jack founded AquaSprouts with fellow student Shannon Crowe (who, conveniently, had studied aquaponics in various places around the world). I’ll let the two of them tell you a bit more about there plans for their small company and flagship product:

Help Get the AquaSprouts Home Aquaponics System Off the Ground

Yep, like so many small businesses with a product to manufacture, they’ve gone to Kickstarter to fund the initial run of AquaSprouts systems. Of course, they’re not the first to do this: I’ve featured two other similar products in the past year and a half. So, I asked Jack what makes AquaSprouts different. I had a sneaking suspicion about the main difference: the growbed of the AquaSprouts system is much deeper than other products, so there are more options for the kinds of plants you could grow. There’s also a fair amount of aesthetic thought that’s gone into this system, so it combines with a typical 10-gallon aquarium into a sleek, modern design. The kits include everything a home aquaponics novice needs to get started.

I’m impressed: at 19, a better beer funnel would’ve been the extent of my product design skills. While I love, love, love the various DIY aquaponics systems I’ve come across, I think an out-of-the-box system like this is critical for getting more people to try small-scale aquaponics. I wish Jack and Shannon lots of luck with their fundraising – they’ll need $100,000 to get this project off the ground, but I think they’re onto something inspiring.

If you decide to kick in, or even pre-order a system (they’ve got three different ones available in this campaign), let us know…