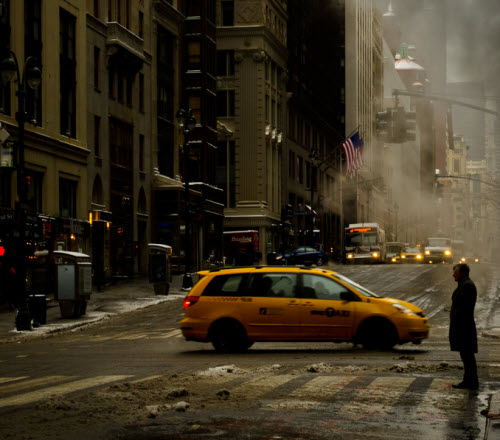 Cities are hotbeds of sustainability, right? From urban agriculture to social enterprise, you’ll find lots of innovative approaches in urban centers, particularly those on the US coasts. Put a lot of people together in one place, and you generate a lot of ideas.

You also generate a lot of heat, it turns out: a new study in Nature Climate Change argues that urban centers (particularly on coasts) generate a lot of waste heat… and that heat is contributing to the weird weather patterns we’ve been seeing lately. This isn’t climate change (in the way we’ve conventionally considered it), nor is it the “urban heat island” effect. Rather, according to the research team that authored the study,

…heat rises up from the cities and interrupts the jet stream, making it ‘weaker in the middle and wider,’ [meteorologist Ming Cai] explained. This changes the dynamics of the jet stream enough that it enhances the flow of southerly winds. As a result, more warm air from the south blows north.

So, does this mean that city living really isn’t so sustainable after all? I don’t think so; rather, I think it shows that we’re taking full advantage of the opportunities for resource sharing offered in urban settings. And while more of us following Susie Cagle’s suggestion to “…put on a sweater and take the bus,” guilt-tripping probably won’t get us to where we want to be. It’s time to think really creatively about resource efficiency… and sharing is good place to start.

Sharing Our Way to Cooler Cities – a Brainstorm

OK, I haven’t read the entire study at Nature Climate Change; I don’t have a subscription. So, I don’t know exactly how the waste of heat breaks down in terms of sources (though I’ve got some good guesses). Therefore, I’m mostly thinking out loud here in terms of potential solutions. As such, feel free to sock it to me on any assumptions I make.

While many will jump to big changes we need to make to our urban infrastructures (most of which I  support completely), I think there are lots of smaller opportunities available to us right now that can reduce our waste heat with only some changes in thinking and behavior (and, of course, motivations for those changes).  Among them:

Ride sharing: I’d bet that transportation isn’t the main source of urban waste heat, but all of those fuel-burning engines are definitely contributing. So, anything from traditional mass transit to urban high-occupancy vehicle lanes (coupled with encouragement of practices like “slugging“) to carpooling apps for smartphones should be on urban planners’ radars. Couple these developments with congestion charging, and you could create less crowded streets.

Building sharing: I’m willing to bet that multistory, multi-use buildings are more efficient – in terms of heating and cooling, anyway – then smaller single family or business structures simply because heat rises. A boiler in the basement of a high rise is probably much more efficient that lots of furnaces in smaller buildings. But which one is more expensive? If you’ve ever priced living or office space downtown, you know that it’s often cheaper (at least in terms of upfront prices) to live outside the city center in a smaller building.  I wonder if some variation on a “cap and dividend” system in which the dividends offset prices of  higher prices in more compact areas could help here?

Industrial resource sharing: I’m betting that industry is the biggest driver of urban waste heat… and I’m also betting that a little “industrial ecology” thinking could address much of this. Cities tend to segregate industry in certain parts of town; why not offer some financial incentives to match up wastes and needs between various companies? A neighbor in the industrial park could probably make use of that heat going up the steampipe… and your company could turn a cost into revenue source.

You probably already see that thinking about this relatively small problem could help cities address some of our bigger environmental challenges – all of these solutions to the waste heat issue also help in terms of greenhouse gas emissions. Obviously, there’s a lot more thought that needs to go into this – I’m just brainstorming – but there’s no reason that this challenge could’t result in some innovation.

Got better ideas for addressing urban waste heat? Show me up – share them with us.