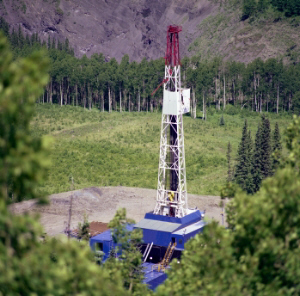 In many western states, landowners don’t necessarily own the minerals beneath their own property. This allows energies companies, in some cases, to drop in and drill. That doesn’t sit well with one wealthy Montana resident.

Forrest E. Mars, Jr. is the billionaire owner of the Mars Candy Company, the wonderful people who bring us treats like Snickers and M&Ms. He’s been a relatively secretive and private individual, but his sprawling Montana ranch – called Diamond Cross – also happens to sit near some of the largest natural gas and coal deposits in the country, including on the northern end of the Powder River Basin. So Mars and his $14 billion are joining ranchers and groups like the Northern Plains Resource Council to file a lawsuit to stop the companies’ operations.

Pinnacle Gas Resources is one of the energy companies that holds a lease on Mars’ land predating his ownership. Last week a judge ruled that Pinnacle could start drilling on Diamond Cross for coal-bed methane, a type of natural gas found in lodged in coal seams.

A Diamond Cross attorney explained that Mars is specifically concerned about the huge amounts of water that fossil fuel mining uses and about a proposal for a new rail line to transport the fuel. Ranchers depend on the water reserves to water their fields and livestock. While energy companies capture the water and hold it in stock ponds for locals to use, it is often lost as runoff.

If the lawsuit is won, an administrator for the Montana Board of Oil and Gas Conversation said it would be “a significant change in the interpretation of state law that says [energy companies] do have access.”

As Stacy Feldman points out on the SolveClimate blog, whether Mars is an environmentalist or a NIMBY (Not in My Backyard) activist doesn’t necessarily matter. This guy’s got the resources needed to take the big coal and gas companies head-on and may even have a shot at winning.

Pinnacle Gas is a publicly traded company and its stock is worth about 1 percent of Mars’ personal fortune. If all else fails, he could always buy it.