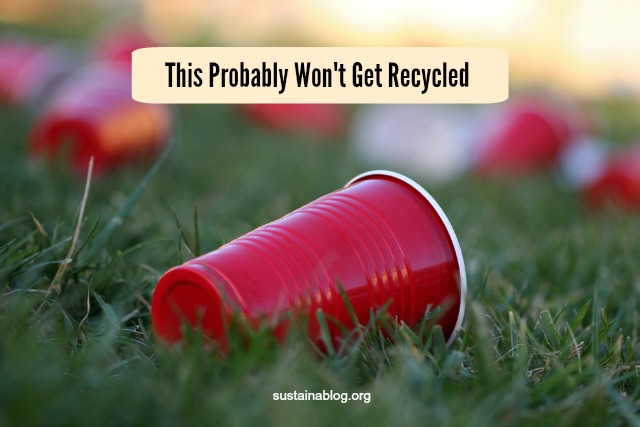 So, if you’re anything like me, you know exactly which plastics can go in your blue recycling bin, and which can’t. You’re dutiful about separating them out, and making sure they make it to the curb (or the recycling dumpster, in my case). You assume you’ve done you part to send that material on to further useful life as recycled plastic.

But, odds are, that plastic’s still going to a landfill, or, at best, getting shipped overseas.

Yeah, I know… I’m shocked, too. After watching the video above from Lifecycle Plastics, my first assumption was “That can’t be right.” But just a glance over EPA facts and figures from 2012 showed me that, in general anyway, a lot of plastics still aren’t getting recovered. I can’t verify the 12 million tons figure Lifecycle uses, but I am pretty certain that they’re in the ballpark.

So, what’s up? Why isn’t that material that you separate out for recycling getting recycled? It’s largely a matter of economics: separating materials out by hand in the US is just too expensive (and I’m sure the current low price of oil doesn’t help that). Without an automated means of separating these materials out, there’s little incentive for recyclers to do more than bundle these materials up to sell to overseas market, or, barring that, dumping them. Recycling may be the right thing to do, but if it’s not profitable, it just isn’t going to happen.

Lifecycle Plastics founder Laura Brower has designed technology that can do that separating for food grade plastics. That means a much lower cost: the company figures that their machinery will cut the price of separating materials by over 90% Based in Colorado, Lifecycle sees their technology as the means to not only recycle plastic, but to provide jobs in the United States.

That’s a pretty impressive goal, and the company is crowdfunding their efforts to put the plan into action. They’re trying to raise $30,000 to finish fabricating all of their machinery, and demonstrating that it can do what they claim. If it can, that means that one day in the future, that plastic take-out cup you toss in your blue bin will definitely get recycled… and a worker will earn a decent wage making sure it does.

You in? Watch the video, read through the rest of the campaign’s content at Indiegogo, and then let us know if you plan to kick in.