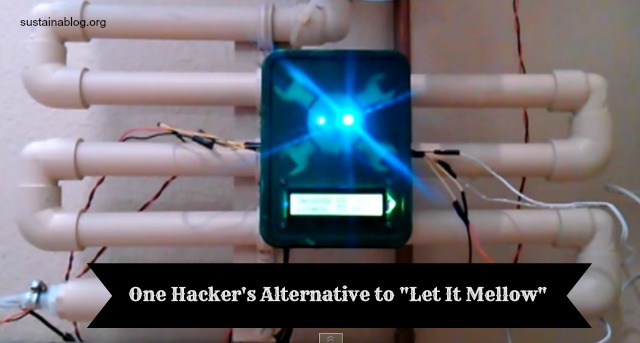 Even with a low-flow toilet, I’m still always looking for ways to cut the amount of water we use in the bathroom. The family has vetoed “letting it mellow,” so, right now, I’ve got a gallon-sized plastic bag set up to capture water with each flush. That helps, but I’d love to do something along the lines of this Arduino-powered greywater system that creator TV Miller labels “hillbilly cheap.” Take a look at it in action:

According to Hackaday’s James Hobson:

The system is very simple and can be easily made for almost any bathroom. By making a zig-zag of PVC pipe underneath the sink, he’s created a simple grey water reservoir sized for his toilet’s flushing capability.  And if you use too much water, it just backs into the drain — think of it as a giant P-Trap! A 12V solenoid and 240L/h water pump switch on after the toilet has been flushed — refilling the tank with reused gray water! He’s also added an Arduino and an LCD screen to keep track of the water saved…

This is pretty impressive, though I’d have to argue with the claim that this could be “easily made for every bathroom” – it strikes me that your sink and toilet pretty much have to be next to each other. My own bathroom has them facing one another, so I’d either have to run items across the floor (creating a tripping/stumbling hazard), or under it (totally undoing the cost savings and easy installation). If you’ve got the right set-up in your bath, though, this looks awfully cool.

Would you be able to completely replace flushing water with greywater? I can’t say… but like that plastic bag in my toilet tank, you could certainly cut the amount of freshwater you use for flushing.

Got more engineering cred than me? Take a look at the set up and the programming, and then share your opinion – would this work as advertised (and for a mere $40)?