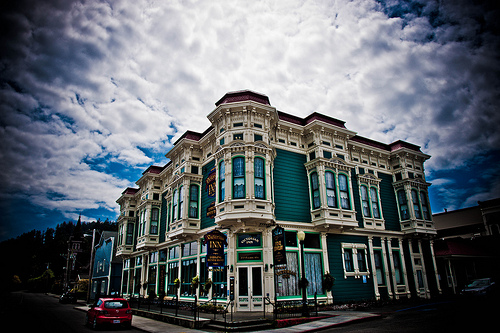 Humboldt County in northern California is known for its eco-friendly, laid back lifestyle.  Solar panels are a common site on homes, and organic food is the norm. Big box stores are rare, and respect for the natural environment is high.  One would assume green energy plans would go over big with residents, but that is not always the case in this region of strong opinions and community pride.

Shell WindEnergy has been looking at Ferndale, California for a small prospective wind farm since 2004.  This quaint Victorian village has been a popular spot for films such as Outbreak and The Majestic.  Residents of Ferndale, who in general are more conservative than other Humboldt residents, are adamantly opposed to the project.

The project would use up to 25 wind turbines along the ridge south of Ferndale. The turbines and towers would need to be transported up to the ridge, possibly through town. Construction to assemble the farm would take six to eight months once the equipment is brought on site, and any roads used will be restored or improved after construction, according to Shell representatives.

Residents expressed concern about construction noise and the addition of large trucks to the slew that already shake the houses along Main and Fifth streets. Many also spoke about the visual impact, light pollution for the night sky and the farm’s effect on property values.

Shell states 120 full-time jobs will be created during construction.  There could be up to 12 full-time employees needed to maintain the wind farm during ongoing operations.

During these times of economic recession, why would residents oppose new jobs?  Why would anyone oppose clean energy?  It’s a classic example of “not in my backyard” (NIMBY).

Wind farms typically do draw criticism from local residents who are concerned about noise and wildlife, as well as aesthetics.  I find wind turbines to be beautiful and mesmerizing; however, I do prefer the natural beauty of hills and mountains.  A wind farm is far more pleasing to the senses then fossil fuel burning power plant.

Wildlife preservation is important, and Shell is not a company to be trusted.  Yet at some point, we need to embrace greener forms of energy in our neighborhoods or reduce our energy consumption greatly.   I’d prefer a small wind farm to the proposed wave project off the coast of Humboldt, as less species would be affected.  Of course, there is always the marbled murrelet to consider.

Wind power is not perfect, but we need to take responsibility for the overconsumption of energy in America.  Solutions that please everyone are hard to find.