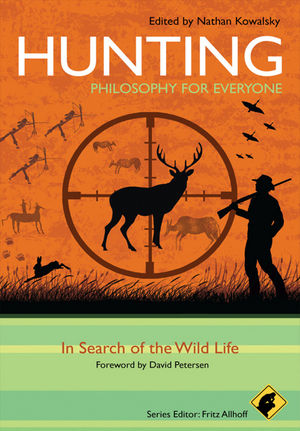 Author’s Note: A free review copy of this book was provided to me by the publisher, Wiley-Blackwell. Wiley-Blackwell’s series of philosophy books for general readers, Philosophy for Everyone, aims to serve general, non-expert readers without actually treating them as “dummies” or creating watered-down, one-size-fits-all philosophy. The risk such an endeavor always faces is to end up serving nobody while trying to serve everybody, failing to satisfy either the experts or the neophytes.

In the anthology Hunting: In Search of the Wild Life (affiliate link), editor Nathan Kowalsky brings together an impressive list of both heavyweights and lightweights from philosophical academia, as well as writers from other fields, many (okay, most) of them being active hunters. The goal: to present to general readers a philosophical examination of hunting from many angles without the jargon, word-spinning, and castles-in-the-air theorizing that characterizes much of “expert” philosophy.

The Philosophy of Hunting

The anthology opens with a foreword by David Petersen, whose credentials include serving as a Field Director for Trout Unlimited and being named the Conservationist of the Year by the Colorado Wildlife Foundation. Perhaps not surprisingly, Petersen’s foreword sets the tone for most of the anthology as a whole in giving a sort of patient nod to criticisms of hunting–but mostly as a launching pad for unvarnished praise (or at least support) of the practice of hunting. For example, he staunchly claims that hunting’s critics completely miss the “self-evident biological fact…that a complementary instinctive need to be hunted is built into the evolved prey species” (xiii; italics in the original). Even better, the predator-prey “sacred game” is in fact an evolutionary sine qua non, something “without which no living thing would even be” (italics in the original).

Despite this trumpeting (I would almost say bombast) for the essentiality of hunting–to humans and to nature as a whole–Hunting seeks to present fairly and in informative detail both sides of the debate. To do so, the essays are split up into four parts, covering the larger categories under discussion:

At first glance, an exploration of hunting including these topics would be very informative, both to supporters and critics, offering key insights and perhaps revolutionary arguments. Petersen is thus rightly confident when he predicts that readers will be “gently jolted into having to rethink what you thought you knew about hunting all along” (xv).

In Intellectual Battle There Is Law

The best part of Hunting is its balance of breadth with tightness, its manageably sized essays focusing on a wide variety of arguments for and against hunting. At the same time, recurring themes clearly come out and provide threads that weave the whole together. These include:

While I would love to argue down every one of these points from a vegan perspective, I will let my previous posts on the topic of hunting serve this function instead (see below). For now, let me only say that Hunting definitely had me red-faced and fuming in moral indignation at some, to me, true boners of logical reasoning and arguing from an accepted “fact” as if its truthfulness were self-evident. Too often, the anthology’s articles come across as either preaching to the choir or dismissing as sentimental bunk the criticisms of hunting.

For example, life inescapably involves death at all levels, from breathing air, to the body fighting viruses and other invaders, and beyond. So, since life cannot avoid death, there is nothing at all wrong or even questionable when a human hunter actively hunts down other living beings with the consciously chosen intent to kill them, actually kills them, and thus provides sustenance (at a bare minimum) to self and family and others. Such a stance completely misses the intentionality behind hunting, the uniquely human ability to choose whether or not to hunt and kill in order to survive.

Similarly, to seek some profound connection with nature through hunting is certainly one way to return to humanity’s roots and learn many things about nature in all of its splendor. But one can do this with non-killing methods as well, from intensive nature-based gardening (e.g., permaculture) to research. None of the insights described by the hunters and writers in this book surprised me, and I have never once gone hunting; all of them were and are insights that can be gained by close, interested attention to nature, deep curiosity, and a willingness to go broad in terms of exploration and research. You do not have to kill to understand death or predation.

The argument about returning to human ancestral “roots” is also like arguing that, because we had to go to grade school to learn basic skills and concepts, we should stay or return there for our entire lives because it is more “natural” and at the foundation of our development. This misses the fact that we evolve both physically and mentally–and morally. That is, we develop to different states of being, with different abilities and different perceptions of the world. Just because we started out as hunter-gatherers does not, by default, mean that that is our “best” state or that we should return there. The argument for this has to be carried out from different angles, not one invoking a “golden age” of humanity. This is as abstracted, ahistorical, and unrealistic as any philosophical building of air-castles.

Now, Hunting does not close the door for contribution to all anti-hunters. We get entirely critical essays, such as Lisa Kretz’s “A Shot in the Dark: The Dubious Prospects of Environmental Hunting.” And there are also those that treat both sides very fairly, such as Tovar Cerulli’s “Hunting Like a Vegetarian: Same Ethics, Different Flavors.” This essay, from a vegan turned hunter (yes, my heart aches at writing that), is in fact the strongest, most compelling discussion about hunting, as well as for hunting, that I have ever read, and it stretched my vegan brain quite thoroughly to find rebuttals to his reasoning.

Is This Really Philosophy for Everyone?

Overall, the anthology has similar glimpses of such challenging philosophical arguments for the justifiableness, if not the need and essentiality, of hunting. It is thus most useful for hunting critics, I think, since it will challenge them to rethink their assumptions and their arguments…and strengthen their argumentative muscles. More importantly, it will give them a glimpse into the opposing camp via the articulate discussion of philosopher-hunters. Those who already hunt or even just think it is not ethically wrong could surely benefit from reading as well, in that it would give them more insight into the discussion about hunting as a philosophy and a way of life.

Luckily, then, Petersen’s rather inflammatory chest beating at the start does not characterize all of Hunting: In Search of the Wild Life, though we do hear echoes throughout. While hunting critics will be challenged and prodded out of their comfort zones, such a philosophical obstacle course can be helpful, a way to keep in shape and never let one’s assumptions become a Procrustean bed upon which to fit the world.

General readers may not have as easy a time with the anthology as readers with some experience in the qualities and conventions of academic, philosophical argument. But Hunting: In Search of the Wild Life is not about syllogisms or elitism or obscurity. It is practical, about philosophy in practice and not philosophy in abstract, and thus it can in fact serve as “philosophy for everyone” who cares to undertake the task of reading and thinking.

As a result, it is a valuable anthology on an important contemporary topic and touches on some of the most important ethical, cultural, and environmental issues of our time. While it may not actually convert anti-hunters or enlighten hunters, it will (helpfully, I think) challenge convictions, raise questions, and provoke serious thought. And that alone, in an age of Google-mind and short attention spans, is always something to be thankful for.

For my previous posts on hunting, please see the following:

Enjoy the outdoors (whether you hunt or not)? Check out our current listings for the gear you’ll need, including tents, sleeping bags, canteens, and flashlights.

Photo credit: boboroshi at Flickr under a Creative Commons license