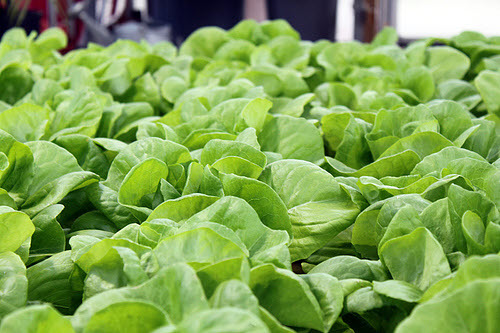 I first started thinking about this particular question when I wrote about the Brightfarms concept in mid-2011. No doubt, food grown on-site has a lot to recommend it: no energy used for transportation or refrigeration, and you couldn’t ask for fresher produce. But, after reading about Vancouver’s new “Living Produce Aisle” store, which opened earlier this month, I began to wonder – again – if this concept, which is definitely “local,” is truly sustainable?

The big question here involves energy use. Plants, regardless of how they’re grown, need light. If that light doesn’t come directly from the sun, it has to be provided through artificial means. The Brightfarms model uses natural light (though I wouldn’t be surprised if its supplemented by artificial light); the Living Produce Aisle, however, makes use of self-contained hydroponic cultivation units… so all light is artificial. In both cases, of course, water and nutrients have to be pumped to the plants, requiring more energy. Yes, you could do this with renewable energy; I see no indication that this is what’s really happening in either case, though. You could also use super-efficient lighting like LEDs (which may be happening here).

The other question that comes to mind is the range of produce that can be grown in a given hydroponic setting. Brightfarms can grow almost anything that’s not a root vegetable (which you can’t ever do hydroponically); they don’t bother with staple grains as they couldn’t compete on price. The Living Produce Aisle concept is limited to herbs, micro-greens, and sprouts. Yes, this produce can be grown quickly – up to four crops a month in some cases, according to owner Tarren Wolfe – but at what cost? The numbers in the The Vancouver Sun‘s blog post give us an indication: the 2000 square foot store can grow between 1000 and 2000 pounds of food a month, and Wolfe projects earnings of $50,000 a month. Yes, they’re serving smoothies and other value-added items, but that still strikes me as really large earnings for herbs and greens… which leads me to believe that the costs of producing them is pretty high, also.

Am I just not seeing other benefits? Or am I right in thinking that the Living Produce Aisle concept creates a “local” product that’s stripped of many of the advantages of its local-ness? Let us know what you think.