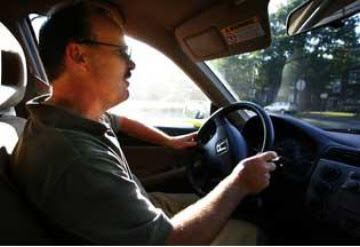 Back in January, I wrote a post at Treehugger about the then-current issue of Mother Jones, which included a feature story on “hypermiler” Wayne Gerdes. When I opened the paper yesterday, I discovered that “hypermiling,” or using techniques while driving to increase fuel efficiency, is catching on in the St. Louis area. According to Post-Dispatch writer Elisa Crouch,

He once cared more about getting places fast, but Dan Callahan now is obsessed with squeezing as many miles as he can out of a gallon of gasoline.

Callahan, 43, a marketing executive in Clayton, drives his 2003 Civic Hybrid slowly — as in never over the speed limit. For city driving, he keeps the air conditioner off until he can’t stand it. He takes his foot off the gas midblock if there’s a red light ahead. He’s always looking for the most downhill route.

“It’s almost like a video game,” Callahan said, driving recently on Natural Bridge Road, his dashboard display showing he was averaging 48.8 miles for his tank of gas. “You get to know all the hills. You know when you can take your foot off the gas and coast. If only I could drive downhill both ways.”

Callahan is just one of several drivers in the area featured, and all have adopted a range of practices that allow them to consistently get gas mileage higher than US EPA estimates. While a number of the techniques used by the most extreme hypermilers like Gerdes are illegal (I remember reading about his “spin-out” turns on interstate off-ramps), the more moderate practices described in this article are well-publicized and encouraged. The EPA and Department of Energy’s FuelEconomy.gov site has tips for driving and auto maintenance that will help you maximize your fuel efficiency.

Interestingly enough, the auto industry is really pushing such practices, too: when I interviewed GM’s Larry Burns in February, and participated in a blogger meeting with him in Detroit in March, he mentioned both times the role of better driving practices in lessening the demand for gas. The argument: there are already millions of cars on the road, and we need to leverage them for fuel savings, as well as producing more efficient cars. Of course, the more cynical among you might suggest that GM is doing this to shift the responsibility onto drivers… but, of course, we all bear some responsibility here.

Any hypermilers out there? What do you do in your own driving to get better gas mileage? I know I’ve slowed down quite a bit, and paid attention to my starting and stopping. I often roll to stops now. Other ideas?