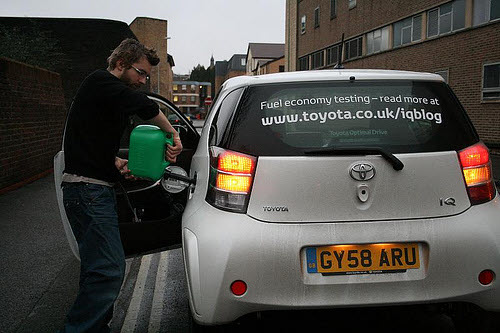 Hypermiling is a relatively recent term––one that has only been around since the early 2000s––focused on finding ways to squeeze the maximum fuel efficiency out of vehicles, provoked by rising fuel costs and environmental concerns. It combines methods first developed during WWII petrol rationing and the 1973 oil crisis with modern technologies (like the real-time mileage displays in many of today’s new hybrids) to help drivers get the most from each fill-up. But hypermiling isn’t only for penny-pinchers and environmentalists. It has lately even become something of a sport, and contests are now held annually around the world to showcase innovative new practices and the skills of those who take hypermiling to new heights.

The practice is believed to have originated in hybrid vehicle driving clubs about a decade ago, and the word itself (hypermlling) made its first appearance in the Oxford English Dictionary in 2008. Lately, it has also been associated with another neologism, nempimania, which is derived from the Japanese word for fuel economy. But regardless of what you decide to call it, hypermiling involves a number of established techniques and practices, ranging from driving habits to loss prevention and simple maintenance.

To reduce fuel-wasting drag and inefficient mass, hypermilers remove running boards, overhead racks, spoilers, and brush guards. They keep their vehicles empty of other passengers and unnecessary cargo whenever possible, and never fill their fuel tanks completely. By driving with a minimum of gas and refueling more often, they reduce mass and ensure better fuel efficiency. Hypermiling also dictates that drivers should keep their windows rolled up to reduce drag.

Vehicle maintenance is one of the cornerstones of hypermiling. By inflating tires to the maximum suggested pressure, drivers can cut down on road/tire friction and reduce resistance by minimizing the surface area where rubber meets the road. Properly aligned wheels, the use of low weight motor oil, frequently replaced air filters, and well-maintained spark plugs also improve fuel efficiency.

Another hypermiling method concerns the escape of evaporated gasoline. To prevent this loss, hypermilers park in the shade and always ensure their gas caps are screwed on tightly.

Driving speed also has a big impact on fuel consumption. Though every vehicle has a slightly different speed at which it achieves maximum fuel economy, most vehicles typically do best between 56 and 70km/h (35-45 mph). All vehicles get their best efficiency when cruising with no stops and minimal throttle in highest gear. Advanced hypermilers also shift into neutral when driving downhill and maximize their cruising time with carefully honed acceleration bursts.

In general, quick but smooth acceleration, coupled with minimal, gradual braking is the best way to conserve fuel. Anticipating red lights and upcoming stops far in advance is another proven way to cut down on consumption.

Another important method––one also used by Olympic speed skaters and racecar drivers––is drafting. When smaller vehicles drive close behind larger ones, they can take advantage of the low-pressure zone created by the lead car and be ‘pulled along’ without having to expend as much fuel.

These techniques all focus on minor improvements, which add up over time to create significant savings. We should note, however, that there are also several commonly accepted hypermilling techniques that have been shown to be ineffective. The use of high-octane fuel, for example, is expensive and yields negligible results. You should also keep in mind that certain hypermiling techniques (such as drafting) can be dangerous, and even illegal in some areas. Experts advise drivers to always put safe driving ahead of efficient driving. But aside from one or two advanced techniques, there is no reason both can’t be practiced simultaneously.

Do you employ any techniques to minimize your fuel consumption? Let us know in the comments.

George Mason is a writer from Sixt UK, a car rental business. He’s currently improving his fitness in preparation for a summer cycle tour of Eastern Europe.