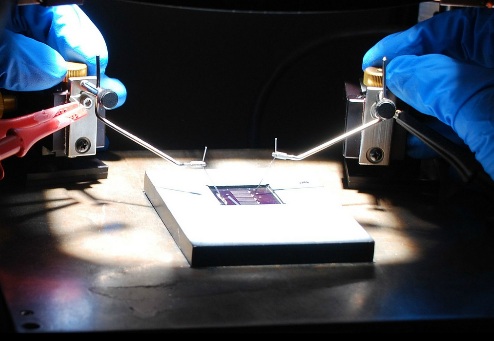 Most of today`s solar cells are based on silicon with extremely high purity, which is one of the major reasons why solar power is expensive. IBM has successfully created a new prototype of a solar cell that uses natural and abundant materials – copper, zinc and tin – to convert photons into electricity.

Lab results have shown that IBM`s new solar cell is capable of converting 11.1% of all sunlight it is exposed to into electricity – 1.1% more than it`s highest converting predecessor. Not much compared to silicon-based or other high-end solar cells, but when costs of materials are taken into account, it turns out to be a very significant technological advancement.

The high purity silicon that is required for traditional solar cells is expensive both in terms of processing and materials. The fact that most solar wafers are cut from large ingots, produces a lot of waste, which further adds to costs.

In the last couple of decades, there has been a lot of money and research going into the development of alternative solar cells. Copper, indium, gallium, selenium (CIGS) and cadmium telluride (CdTe) are two of the most promising new solar technologies at this point. Unfortunately they both incorporate rare and expensive materials. British Geological Survey (BGS), a world-leading geoscience center, gave indium a “relative supply risk index” of 6.5, which means that the economic feasibility of indium-based solar cells is uncertain in the near future. Our supply of tellurium is also worrying.

CZTS-based (copper, zinc and tin sulfide) solar cells do not rely on rare and expensive elements, but on those that are abundant in nature. These cells are easily manufactured by using ink-based techniques such as printing or casting – cheap and green ways to produce solar cells.

The research team behind the new solar cells is aiming to improve the conversion rate all the way to 15%. At this point,  CZTS-based solar cells would become a highly viable alternative to current established technologies – both those that are crystalline-based and thin-film solar cells.“Our CZTS PV cells could potentially yield up to 500 gigawatts per year – getting closer to the Terawatt levels of renewable electricity the planet needs,” said Teodor Todorov and David Mitzi, IBM Research photovoltaic scientists.

It will be interesting to see if the research team at IBM announces further technological breakthroughs in the next coming years. Who knows, maybe CZTS will lower solar panel costs and make solar power accessible for more people.