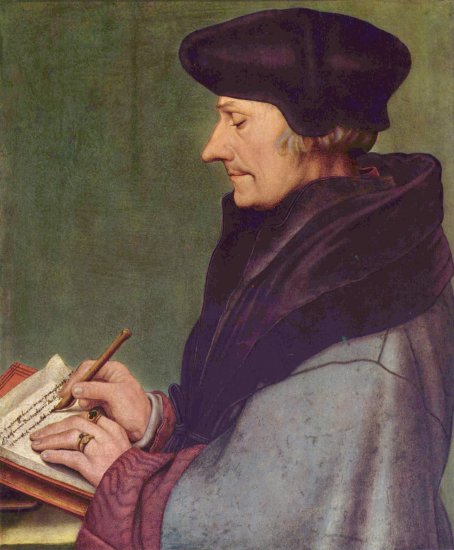 Desiderius Erasmus is a hero of mine.  He was a 16th century monk from Rotterdam who maintained correspondence with most of the educated world of his day.  He translated the Hebrew Scriptures to the vernacular language.  On behalf of the Pope, he wrote grand theological works like “The Freedom of the Will,” which was a long-distance debate with Luther (whom he never met in person).  But Erasmus was at his best when he wrote satire,  which he did for a cause – the reformation of the Catholic Church.  In the process he greatly influenced the direction of the Church, as was seen at the council of Trent.  He so influenced the other core, Reformation thinkers (Luther, Calvin, Zwingli).  It is often said that “Erasmus laid the egg that Luther hatched.”  He also provided key ideas to the early Anabaptists, the pioneers of modern, freedom of religion.”

What Got Me Thinking About Erasmus?

A couple of weeks ago, Stephen Colbert, of Comedy Central fame, had a hearing with the Federal Election Commission.  He asked for permission to start a PAC (Political Action Committee) to raise unlimited funds for advertising for the new, Rally to Restore Sanity – And/Or Fear, “Party” that he and, “arch nemesis,” Jon Stewart started last summer.

Because of several recent Supreme Court Decisions, decades of campaign finance reform have been thrown out of the window.  Labor unions, wealthy individuals, and large corporations are again free to contribute unrestricted funds with limited transparancy.  Colbert asked to do the same for moderates with a sense of humor.   With those funds, Comedy Central will be able to serve as a counter-balance to those other voices.

How is This Channeling Erasmus?

To the extent that Stewart and Colbert employ witty sarcasm in interviews with opinion makers, they are channeling Erasmus at his best.  I occasionally try to employ some wit, but I’m not even in the same class as these, now potentially well funded, imitators.

My path to blogging began by posting comments on blogs and news articles.  When I read something with which I agreed, I would send a supportive comment.  On articles where I disagreed, I would send a constructive suggestion.  I discovered that >90% of authors would respond personally by the next day.

One day I was on the Green Options blog site sustainablog, and saw the tab, “Write for Us” at the upper right hand corner.  I submitted an application, and a while later, Clayton Cornell, of what was then, Green Options, sent me information about how to blog.  My learning curve was rather slow, but I eventually learned how to blog.

I’m imitating more of the Erasmus who communicated with thoughtful people of his age, because the people who visit these sites care a lot about issues such as sustainability, climate change, and feeding the world.  In these past two years I have written 201 posts on 5 sites and one document posting site.  In terms of “reads” that I can track, >77,000 folks have at least perused the posts (I hope they are mostly folks). I typically get 300-350 reads of each post.  Erasmus wrote seriously slow, snail mail to one individual at a time.  Imagine what it would have meant if Erasmus had access to a computer and the internet?  Imagine if he had been able to have a Comedy Central show?