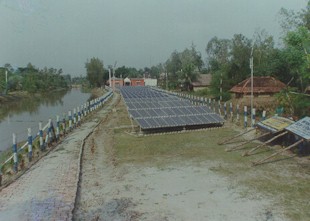 India sure seems to have the hang of this whole “sustainable development” thing… From WebIndia123.com, news of a new renewable power corporation in West Bengal:

The decision was taken at a meeting of the power department keeping in view the central government’s aim to provide electricity to every household by 2012.

“While some power plants would be set up by the new corporation, some others would be in collaboration with the private sector,” said Gon Chowdhuri, who is also the special secretary to the power department.

“This is a very bold and aggressive new step towards green power generation and we hope to begin initially with 50 megawatt of generation and gradually reaching the target of 400 megawatt,” he said.

Keep in mind that, as a developing country, India’s not required to meet Kyoto Protocol goals. Yet while developed countries like, say, us (the US that is) are still engaged in really silly arguments about the reality of global warming (enough, already — that’s so 1998), here’s a state in a “Third World” country with a definite timetable for powering itself completely on renewables. Any wonder why their economy’s growing so quickly?