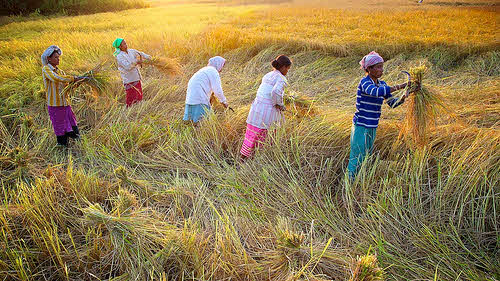 India is now the world’s third-largest grain producer after China and the United States. The adoption of higher-yielding crop varieties and the spread of irrigation have led to this remarkable tripling of output since the early 1960s. Unfortunately, a growing share of the water that irrigates three-fifths of India’s grain harvest is coming from wells that are starting to go dry. This sets the stage for a major disruption in food supplies for India’s growing population.

In recent years about 27 million wells have been drilled, chasing water tables downward in every Indian state. Even the typically conservative World Bank warned in 2005 that 15 percent of India’s food was being produced by overpumping groundwater. The situation has not improved, meaning that about 190 million Indians are being fed using water that cannot be sustained. This means that the dietary foundation for about 190 million people could disappear with little warning.

India’s grain is further threatened by global warming. Glaciers serve as reservoirs feeding Asia’s major rivers during the dry season. As Himalayan and Tibetan glaciers shrink, they provide more meltwater in the near term, but there will be far less in the future. To complicate matters, the monsoon patterns are changing too, making these annual deluges more difficult to predict.

What India is experiencing is a “food bubble”: an increase in food production based on the unsustainable use of irrigation water. And this is happening in a country where 43 percent of children under age 5 are underweight. A survey for Save the Children found that children in one out of four families experience “foodless days”—days where they do not eat at all. Almost half subsist on just one staple food, thus missing vital nutrients that come in a diversified diet.

Although poverty has been reduced for some, two-thirds of the population still live on less than $2 a day, according to the World Bank. And the population is growing by nearly 30 million every two years, equal to adding another Canada to the number of people to feed. Within 20 years, India’s population is expected to hit 1.5 billion, surpassing China.

To feed all those mouths, the government needs to go beyond the revamped food distribution program laid out in the Food Security Act signed into law in September. Averting a sudden and devastating collapse of the food bubble will require efforts to address the underlying threats to India’s food system. This involves ramping up initiatives in health, family planning and education to put the brakes on population growth. It also means rethinking energy and transportation policies to reduce India’s contribution to climate change. It is incredibly shortsighted to be building coal-fired power plants in a country where climate change threatens to worsen water shortages.

Overpumping aquifers is hard to stop, in part because it is invisible, only apparent once a well goes dry. In July, the Indian government belatedly announced that it would boost spending to map out the country’s aquifers to better understand water availability and the rate of depletion, but this is just one step. The energy subsidies that encourage heavy overpumping of underground water will have to be phased out. Traditional water harvesting—capturing the excess water that comes during monsoons in small ponds—can help create a buffer. Farmers can also reduce water use by using more-efficient irrigation techniques and by growing less thirsty crops—for example, more wheat and less rice.

Today’s situation is reminiscent of what I found in 1965 when I was sent to India by U.S. Secretary of Agriculture Orville Freeman to help evaluate the country’s forthcoming five-year plan. There were drought conditions in almost every corner of the country. It quickly became clear to me that the harvest would not come close to meeting the estimated demand. Without food aid, famine would be unavoidable.

I alerted Freeman, met with U.S. and Indian officials and drafted a plan. Thus was born President Lyndon B. Johnson’s “short tether” policy, tying U.S. grain shipments to India to a restructuring of India’s agriculture. The U.S. government’s shipment of 10 million tons of grain—one-fifth of the U.S. harvest that year—to India in 1965 became the largest food relief effort in history.

Today, food security is India’s No. 1 challenge, as it was half a century ago, even though the country now produces close to 240 million tons of grain compared with the 95 million tons needed in 1965.

Will we witness famine if many wells run dry at the same time? Or will the United States be called on to again come to the rescue?

With a third of the U.S. grain harvest now going to fuel for cars and another third going to feed livestock, U.S. exports are down. Global demand is increasing rapidly as populations expand and as more people move up the food chain, consuming grain-intensive animal products. A tightening grain situation means rising food prices for all, a trend that will continue without a global mobilization to use water more efficiently and quickly stabilize population and climate.

In the meantime, we hope India’s wells won’t run dry too soon.

This piece originally ran in the LA Times on November 29, 2013. Lester R. Brown is president of the Earth Policy Institute and the author of Breaking New Ground: A Personal History and Full Planet, Empty Plates: The New Geopolitics of Food Scarcity. Data and additional resources available at www.earth-policy.org.