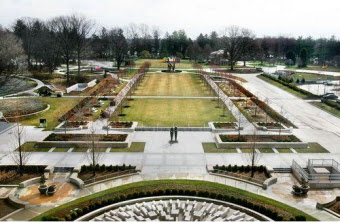 Even though I live smack-dab in the middle of flyover country, it’s easy to get entranced by all the green activity on the coasts, and miss what’s going on in my own backyard. Chicago’s certainly in the game, right up there with San Francisco, Portland and NYC, and now I find out that Indianapolis is looking hard at sustainability measures they might implement. Right now, the (very impressive) green roof atop the parking structure of the Indianapolis Museum of Art stands alone in terms of major sustainable development projects (and yet another example of a museum going green), but city leaders hope that roof sparks the imagination of citizens and government officials alike. According to the Indianapolis Star, the mayor and other officials are looking at a wide range of projects:

All of these efforts are appealing not only for giving Indianapolis some green cred: they could also save a lot of money. Green roofs are expensive, but because they retain so much storm water, they’re much more affordable than drainage systems (of course, that also means that engineers and planners have to consider the water weight on the building structure). Then there’s the energy savings, the lessening of the urban heat island effect, the absorption of pollution… that’s all from just one technology that can be widely used.

Indianapolis is still very much in the planning stages, but they’re clearly thinking about a multifaceted approach to sustainable development, which is key — one technology won’t do everything. Combine those green roofs with cleaner fuels for public transportation and city vehicles, a more pedestrian and bicycle-friendly downtown, and some urban reforestation efforts, and Indianapolis won’t just have a greener city — they’ll have one that’s much more appealing to potential residents and business owners.