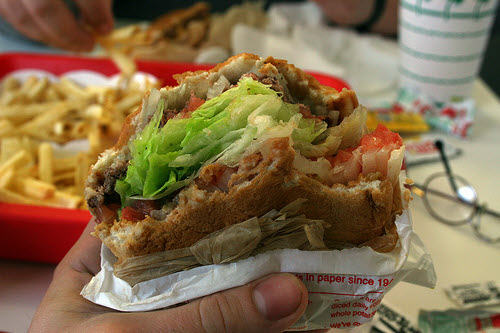 Editor’s note: Missed earlier posts in this series? You can find them here.

“We are the food we eat, the water we drink, the air we breathe. And reclaiming the democratic control over our food and water and our ecological survival is the necessary project for our freedom.” [i]

The objective of much of our industrial food system is to provide a profit to shareholders and CEOs. Coca-Cola’s advertising budget was over $2.9 billion dollars in 2010, money well spent from a stockholder’s point of view: profits that year were $11.8 billion.

The current system, however, was not built only to amass wealth. Many policymakers and supporters, historically as today, have been driven by the conviction that industrial agriculture is the best way to produce massive amounts of affordable food. And in some ways it has accomplished this. People in the U.S. spend relatively little on food – about 7 percent of their total spending, as compared to 13 percent in France, 23 percent in Mexico, and 38 percent in Vietnam. Most individuals in the U.S. devote less time, energy, and money to feeding ourselves than they ever have historically.

On the buying end, it seems an irresistibly good deal, our 99¢ soda or $1.50 loaf of bread. But these prices represent just a fraction of the true costs of getting that soda and bread into our shopping bags. We pay for the hidden costs of the corporate food supply chain in multiple ways, not all of them financially.

Small- and medium-sized farmers pay extremely high hidden costs. Their farms have been steadily disappearing as land is further consolidated into the hands of fewer people. The U.S. has lost 800,000 farmers and ranchers in the last 40 years. Between 1900 and 2002, the number of farms in the U.S. shrank by 63 percent, while the average farm size increased by 67 percent.[ii] The dairy industry has undergone an even starker decline: in just over 35 years, between 1970 and 2006, the country lost 88 percent of its dairy farms, while the average herd size per farm increased from 19 to 120 cows.

Some populations, depending on class, race, nationality, and livelihood, pay more dearly than others. As mentioned in our previous piece, black farmers and land owners suffer. Farmworkers and other laborers all along the food supply chain also pay by receiving inadequate wages; they are twice as likely to live below the poverty line.

As consumers, we all pay with our health and well-being. Our country’s most popular cuisine is affectionately called ‘junk,’ after all. Eating the highly processed food made readily available to us has led to epidemic levels of diabetes and heart disease. Individuals get chastised for their own diet-related problems while ‘junk’ food is much easier and cheaper to access than healthy food.

Recent outbreaks of Listeria and stomach acid-resistant E. coli are other manifestations of the costs to our health. Food-safety experts blame the industrialized production of grain-fed cattle and poultry for the emergence of these dangerous bacteria strains.[iii]

Spraying toxic pesticides on our food has become the norm, so much so that we have come to view it as part of ‘conventional’ agriculture, though there’s nothing conventional about it. Introduced in large scale only after World War II, using surplus warfare chemicals, pesticides are now applied at a rate of 1.1 billion pounds per year in the U.S. That’s 22 percent of the world’s total use.[iv] These chemicals move throughout our ecosystem, making their way into groundwater and our drinking supply, traveling down streams and rivers, and eventually reaching the ocean. In just one example, fertilizer running off fields and down the Mississippi River has created such an imbalance that there is a ‘dead zone’, where nothing can survive, in the Gulf of Mexico the size of New Jersey.[v] Pesticides also wind up on our plates and in our bloodstreams. In 2005, the Environmental Working Group tested the umbilical cords of 10 babies from different U.S. hospitals and found an average of 200 industrial chemicals and pollutants in their blood, including a number of pesticides.[vi]

Monocropping, a farming system where the same crop is grown on a piece of land year after year, is foundational to industrial-scale agriculture. Yet it depletes the soil, upends the ecological balance, and creates conditions highly susceptible to pests and disease, requiring more pesticides and fertilizers.

If all of these costs showed up in the prices we pay at the store, things would be very different. If prices reflected the oil that powers the jet to bring a banana thousands of miles, together with the air pollution that results, the workers’ healthcare costs after handling pesticides, and the future loss of soil health due to monocropping, this fruit would certainly be a luxury item in the North rather than part of an average American breakfast.

Has agribusiness won such control that a turnaround is impossible? No. Small farmers, grassroots groups, and advocacy organizations are demanding food sovereignty, meaning the right of every people to produce adequate, healthy, affordable, and culturally appropriate food for all. They are everywhere creating and supporting community-controlled, scaled-down, local food networks. Dismantling the governmental policies and global trade rules that have taken agriculture out of the hands of small farmers the world over is the prerequisite for claiming a just and healthy food system.

Check back on this series over the next weeks to learn about policy victories which are transforming the industrialized food supply chain, and about how you can get involved.