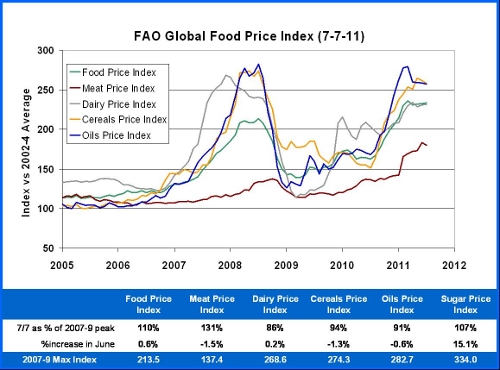 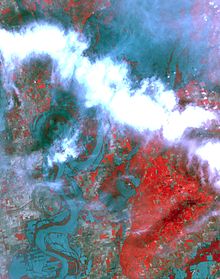 FAO (The food and agriculture organization of the United Nations) released their June estimate of global food price indices yesterday.  The new numbers were mixed, but not encouraging overall. Sugar was up 15% over the month. All the other indices were nearly flat: Dairy up 0.2%, Oils down 0.6%, Meat down 1.5%, Cereals down 1.3%.  The net change was a miniscule +0.6%.  This is bad news for poor people who spend much of their income on food for their family.

Farmers Are Trying To Reverse This Situation

Farmers have been doing all they can to boost production and get reserves back up.  The American row crop farmers have been frustrated by flooding or fields that were too wet to plant in the Midwest.  Along the Mississippi river, farmers watched helplessly as 40-50,000 acres of prime land was flooded.  Away from the rivers, drought and heat had already hurt yield potential.  For wheat growers in France, Kansas, the US and Russia, rains were late for the winter wheat crops.  The French crop could be 15 percent down – the lowest in four years.

Then to make matters worse, the rains were too early for planting the spring wheat, corn and soybean crops (34% of normal vs a typical 85%.)  In May, Reuters reported that Ker Chung Yangan investment analyst for Phillip Futures in Singapore, a “double whammy.”  By June 5, only 79% of the US spring wheat crop had been sown vs an average of 98% for the past five years.  This makes millers nervous because so many baked products depend on the high protein, hard red spring wheat crop from North Dakota, Montana and Minnesota.

A Brief Moment of Optimism in June

FAO distributed high quality wheat seed to flood-affected farmers in Pakistan – $54 million worth.  That lead to a bumper crop worth nearly $190 million – a 4x return on investment.  Wheat yields in that country are often limited by the fact that there is no viable “farm credit” system to allow farmers to buy good seed, fertilizers and chemicals.  Then, in early June, Russia announced that they would lift their export ban on wheat. That caused a round of selling of wheat – something that is regretted now.

This Food Price “Spike” May Not Be a “Spike” Afterall

The previous food price spike started in April of 2007 and ended in January of 2009 (21 months).  This spike began in January of 2010 and it still going strong 16 months later.  With poor harvests this fall, we can’t expect to see prices drop until well into next year

A Hard Question That Needs Much Thought and Discussion

This may not be a “spike” at all.  This may be the new food price paradigm which has major ramifications for global security and international policy. During future shortages, do we sell these limited supplies to the rich customers (Japan, Western Europe, Oil Rich Middle Easterners) or to the world’s poor (sub-Saharan Africans, oil-poor Northern Africans, Eastern Europeans, Central Americans? ).  These are very important questions that deserve a serious dialog.  You can join that discussion here.

If you would like a copy of the graph or the underlying data, email me at applied.mythology@gmail.com.  My main website is Applied Mythology.

Aerial View of Levee Breach in Illinois from Wikipedia