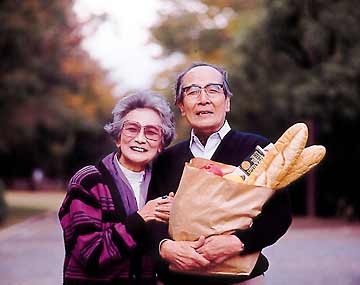 Once again, I found an interesting news item that spans my vocation and avocation… Yesterday’s Daily Yomiuri Online notes that Japan believes it has another resource to tap in the struggle against global warming: its elder population:

The Japan NGO Council on Aging (JANCA), with a membership of about 13 million, hopes to turn senior citizens into environmentally-aware role models, harnessing their knowledge and creativity to urge the public to engage in the conservation movement.

The organization’s guidelines state it is the responsibility of elderly people to pass on environmental values–such as preventing unnecessary waste–to the next generation and calls on them to seize the initiative.

In addition to promoting actions by individuals, the organization also hopes to spread environmental activities to all areas of society.

The immediate program includes a campaign to set air conditioning to 28 C in summer and to stop people from leaving their vehicle engines running while parked.

The measures are also aimed at reducing greenhouse gas emissions by 6 percent, as targeted by governments after Kyoto Protocol to the U.N. Framework Convention on Climate Change took effect in 2005.

As I understand it, Japan’s culture gives elders a great deal of respect, so this makes a lot of sense. The article also notes that the country’s senior citizens also have traditional knowledge that JANCA believes would be helpful in cutting greenhouse gas emissions: Keiko Higuchi, head of the organization, specifies use of rainwater and “the effect of sprinkling water on the streets.” Knowledge like this could have an impact in many countries where an energy-intensive lifestyle is still relatively new (although I guess that’s all of us really) — hopefully, other nations will look to elders for knowledge that could be otherwise lost.