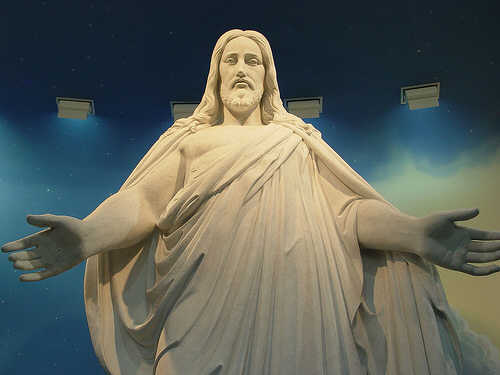 Editor’s note: Chad Crawford, our regular writer on the intersection of religion and the environment, is taking some vacation time this week, so we’re pleased to offer another post from one of Professor Siman Sethi’s students in her Media and the Environment course at the University of Kansas. Writer Lauren Keith originally published this post to the course blog on Tuesday, March 11, 2008.

Are you there, God? It’s me, global warming.

When I logged on to Facebook yesterday, I was disturbed to see that my two least favorite things (organized religion and Yahoo! Inc.) have friend requested my best buddy, the Green Movement.

And the Green Movement accepted their friend request.

In a story posted yesterday on Yahoo! Green (which I had no idea existed until 12 hours ago), the Catholics’ second-in-command declared pollution a sin.

According to the article, the Pope has made a decent fuss about environmental problems, enough so to scare some churches to invest in eco-palms for this year’s Palm Sunday.

As much as I disagree with everything else the Pope stands for, I like seeing a major religion acknowledge and combat the climate crisis. In fact, the Vatican announced plans last summer to become the world’s first carbon-neutral state. Yahoo’s article said that photovoltaic cells have been installed and that the Church has discussed the consequences of global warming.

Even though pollution is now one of the seven deadly sins, recent studies show that fewer Catholics are attending confession. It’s okay, sinners, the rest of the human race doesn’t want to own up to global warming yet either.

While Catholics only have a few new sins to steer clear of, I’ve compiled the Green Movement’s 10 “Greenmandments” to make sure the rest of us can also avoid eternal damnation.

And Mother Earth did spake:

I: Thou shalt have no other planets before Me.

II: Thou shalt not exploit resources in vain.

III: Thou shalt take a break from electronic devices and unplug them while not in use.

IV: Thou shalt recycle, even if thou must driveth to Wal-Mart in thy carbon dioxide emitting, 10-miles-per-gallon-getting Hummer.

VI: Thou shalt not sleep with polluters to convert them to thine side.

VII: Thou shalt not steal, because then thou art consuming earthly goods.

VIII: Thou shalt not bear false witness against thy neighbor’s greenhouse gas emissions.

IX: Thou shalt not covet thy neighbor’s solar panels, greywater irrigation system or organic garden because thou shalt soon have one of thine own.

X: Thou shalt not key thy neighbor’s Prius, even if thou would like to own one or thou knoweth the truth about its origins.

Hallelujah! Praise be with the planet.