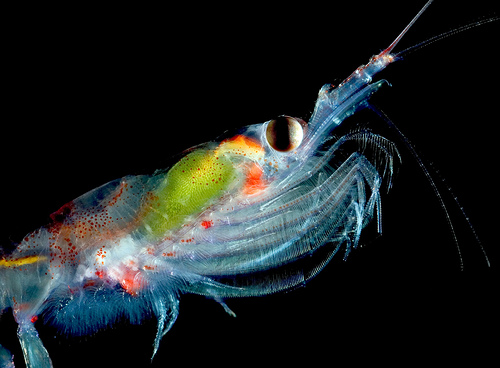 What’s that smell?  Another slightly fishy health fad, of course!  Krill oil capsules are becoming a popular alternative to fish oil, but questions remain: are they really better?  And is it sustainable?  Well, I’ll share what I’ve found and leave the rest up to you.

In terms of health benefits, krill oil is claimed to have several advantages over fish oil. Both provide DHA and EPA omega-3 fatty acids, but proponents claim that krill oil has more of it, in a more bioavailable form, and with fewer toxins than fish oil.  For one, fish eat relatively high on the food chain and so, thanks to ocean pollution, heavy metals and toxins bioaccumulate in their fatty tissue and then turn up in your fish oil capsules.

But krill, which are shrimp-like crustaceans that grow to about 2 inches long and swim about in the cold waters surrounding Antarctica, feed directly on plankton and inhabit cleaner waters.  The oil extracted from them is much less likely to contain harmful substances.  Also, the omega-3s in krill oil are bonded to phosphate groups (making them phospholipids), which means they can be immediately taken up into cell membranes, whereas fish oil fatty acids come in triglyceride form and must be converted by the body before use.

Users of krill oil claim a wide range of benefits, from better focus and mental clarity to reduced cholesterol and joint pain.  It is also said to relieve the symptoms of PMS.  Neptune Krill Oil, one of the name-brand producers of the stuff, won a major victory in September 2010 when the Canadian Minister of Health approved the product’s health claims.  Health Canada found that the supplement reduced LDL and raised HDL cholesterol levels, reduced inflammation and pain related to osteoarthritis, and for women, reduced symptoms of PMS and dysmenorrhea.  This Neptune press release is proud to point out that krill oil was found to have more significant health benefits than fish oil, and at a much lower dosage.

Currently, krill oil is recommended for short-term use only (up to three months), and is most commonly used to treat cardiovascular issues or joint pain.  But some people choose to use it as a preventative measure, or as a general health enhancer.  And the best part: users who switch from fish oil to krill oil report significantly less belching and fish-breath.  That’s certainly a plus.

How Sustainable is Krill Oil?

The sustainability question is more complicated.  In terms of biomass, krill is the largest fishery in the world, and current commercial harvesting is limited to about 200,000 tons per year by an organization called CCAMLR.  This harvest is barely a scratch on the estimated krill biomass of 500 million tons, and so there is no apparent risk that we’ll use up all the krill anytime soon.  On those terms, harvesting krill is a lot better than harvesting larger fish with more fragile populations.

However, krill swarms are the foundation blocks of the oceanic food chain, and even if it seems there are plenty to go around, a slew of scientific studies suggest that even a minimal level of commercial harvesting can have a significant effect on larger marine species such as seals, whales, and seabirds.  These animals frequent certain preferred areas to look for krill – and these are often the same areas into which krill trawlers drop their long hoses and nets.  One case study for the British Antarctic Survey found that krill harvesting at a volume well within the limits set by CCAMLR could reduce the Antarctic fur seal’s population to half its equilibrium size.  Other studies show direct correlations between krill biomass and penguin and seabird populations.

Of course, most of the scientific reports call out for further research.  Other sectors give more confident advice: the health-oriented site NaturalNews, for example, has multiple articles lambasting krill oil for being unsustainable, ineffective, and laden with toxins.   Then they recommend an alternative supplement, with which they have an affiliate sponsorship, and so we must wonder how unbiased their reporting really is.  As usual, a completely clear answer is nowhere to be found.  It all depends on how much fishiness you’ll tolerate in your diet.

Image credit:  maiabee on flickr under a Creative Commons license