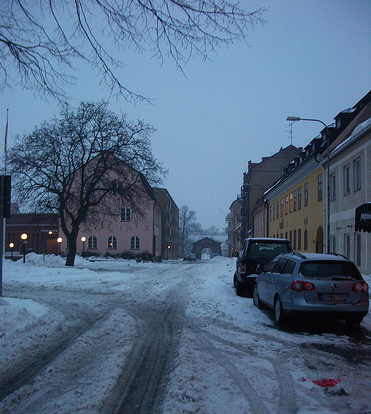 Ten years ago, Kristianstad, Sweden made a pledge to wean itself from its use of fossil fuels, and currently the city can claim to have eliminated oil, natural gas, and coal in heating homes. Compare that to twenty years ago, when all of the city’s energy for home heating came from imported fossil fuels.

The city creatively generates electricity using everything from food scraps to manure to used cooking oil, converting waste into biogas, and then efficiently pumping heat all over the city from large central furnaces.

This drastic change in how the city produces and uses energy has resulted in greatly reduced dependence on fossil fuels and a significant decrease in carbon emissions. How does it work?

From the NY Times comes the story:

A hulking 10-year-old plant on the outskirts of Kristianstad uses a biological process to transform the detritus into biogas, a form of methane. That gas is burned to create heat and electricity, or is refined as a fuel for cars… Kristianstad also burns gas emanating from an old landfill and sewage ponds, as well as wood waste from flooring factories and tree prunings.

Kristianstad’s energy makeover is rooted in oil price shocks of the 1980s, when the city could barely afford to heat its schools and hospitals. To save on fuel consumption, the city began laying heating pipes to form an underground heating grid — so-called district heating. Such systems use one or more central furnaces to heat water or produce steam that is fed into the network. It is far more efficient to pump heat into a system that can warm an entire city than to heat buildings individually with boilers.

Why did Kristianstad Choose Energy from Waste?

Due to the agricultural makeup of the city, Kristianstad can effectively use those by-products of food production and food processing to create energy. It’s a brilliant example of using what is on hand to create alternative and renewable energy, better serving the needs of the population and local economy, and avoiding the use of expensive, environmentally damaging, and depleting fossil fuels.

Kristianstad’s energy initiative has resulted in the halving of its fossil fuel usage, and the reduction of the city’s carbon dioxide emissions by 25% in the last ten years.

What if more cities around the globe relied on local solutions to producing energy, versus importing vast quantities of limited and polluting fossil fuels?

For more on this story, check out the coverage on The New York Times.

Looking for greener ways to stay warm this winter? We’ve got lots of jackets made from organic materials currently listed for men, women and kids.

Image credit: bixentro at Flickr under a Creative Commons license