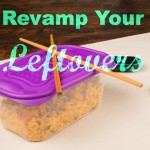 Got stacks and stacks of plastic containers in the fridge… some of which you have no idea how long they’ve been there? Yep, I hear you – we really try hard not to contribute to the 40% of food that goes to waste. I eat an awful lot of leftovers for lunch. But, no matter how good a meal, you get tired of the “heat and eat” routine. You just want something different… something else… anything else!

After looking over this list of ideas for leftovers from our sister site Eat.Drink.Better, it strikes me that at least part of the solution lies in looking at those leftovers as ingredients from something new, rather than a whole dish in and of themselves. A quick look at condiments, spices, and other potential add-ons in the refrigerator or pantry may get the gustatory imagination stirring.

Got your own special takes on certain leftovers? Do share…

10 Resources to Reduce Food Waste by Using those Leftovers (via http://eatdrinkbetter.com)

Reduce food waste in your kitchen by safely reusing your leftovers instead of tossing them out! Food waste is a terribly problem worldwide. As we struggle to feed an exploding world population, wealthy nations that have an abundance throw about 1/3…