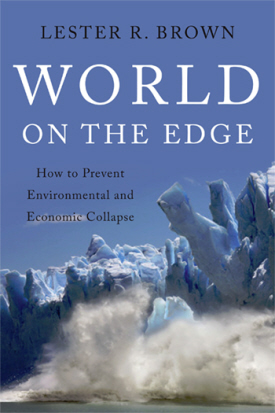 For a number of years, we’ve used the Apollo project as metaphor for the kinds of transformation we need to create in terms of our energy and resource use. It’s a compelling, aspirational vision that draws on our desire to reach goals that might seem unattainable. No doubt such concepts harness creativity and ingenuity… and inspire us to look beyond constraints we’ve always seen as impassable.

Apollo works if we view such transformation as desirable; if it’s an absolute necessity, however, we may need to draw on other metaphors that inspire other motivations. Agricultural economist, MacArthur fellow, and founder of the Earth Policy Institute Lester Brown does just that in his new book World  on the Edge: How to Prevent Environmental and Economic Collapse.* Arguing that the collapse of natural and social systems on which we rely may be imminent, Brown draws on a very different historical parallel: the mobilization of the entire economy during World War II to defeat the Axis powers. We’re not simply aiming for goals we once saw as unobtainable; rather, we’re fighting against challenges to global security that we’ve never viewed as such.

An Alarm… but not Alarmism

Sound alarmist? No doubt some will throw that label at this book (as they’ve done with others by Brown). Yet, if you’ve read any of the posts by Brown that we’ve published here, or any of his other books, you know that he’s exacting in tying his claims to data derived over long time periods, and from around the globe. From watershed depletion to global warming to food bubbles, Brown’s able to take voluminous data, and demonstrate its revelation of global trends in natural systems… without alienating readers that may not possess the degree of scientific training and study he’s built over a lifetime.

While Brown and EPI are quite generous with their findings (just take a look at the number of posts we’ve published by them), reading World on the Edge brings topics ranging from crop failures to state failures together in a way that no series of blog posts could. So, it may not be readily apparent why, for instance, shrinking water tables may be tied to the political unrest were seeing right now in the Middle East and Africa… but Brown draws these connections with both scientific rigor and the patience of a committed teacher. He draws the connections between economic, environmental, and social issues with clarity and authority.

Drawing Back from the Edge

As with most of Brown’s books, if you read only the first two-thirds or so, you’ll come to the conclusion that we’re doomed: how can we possibly escape the escalating trends of food and soil depletion, poverty, and political unrest that he argues will come to a head in the next few decades? While the picture painted in the book’s first two sections is grim, Brown, as always, argues that we also have the means available to avoid the worst consequences of our current path. Plan B, the framework created by the Earth Policy Institute, does involve dramatic changes in our collective way of life… but is also based on existing technologies and concepts, many of which have already demonstrated their worth. By focusing on mitigating climate change, restoring natural systems, eliminating poverty, and stabilizing population, we don’t have to go over the edge. Rather, we can transform human relationships with the natural world, and, in the process, greatly reduce the stresses we’re placing on the systems that sustain us.

Some will argue the costs Brown lays out are too high, especially as we work to rebuild economic growth and stability. An economist at heart, Brown not only demonstrates that the price tag he puts on Plan B is reasonable, but also a pittance compared to the costs created by the potential calamity that awaits us. His argument for a shift away from income taxes, and towards carbon taxes, not only works with the market system in terms of reallocating costs and the signals they send, but also, with planning, assures that those at the bottom of the socioeconomic ladder won’t be the hardest hit.

While Brown paints a grim picture of “business as usual” (or Plan A), the consequences of Plan B — low-carbon energy, ample food and water supplies, universal female education, political stability, and others — are certainly worthy of our aspiration. Is Brown’s view of the current world alarming? Yes. But this isn’t a book by an alarmist; rather, it’s ultimately optimistic that we can recognize more sustainable paths towards health, wealth, and security, and exercise the will to take these paths.

As with all of the books published by Earth Policy Institute, you can download a free PDF copy of World on the Edge at the EPI bookstore.

Ready to make an easy, healthy reduction in your carbon footprint? Check out our selection of hybrid bikes from brands like Fuji, Trek, and Columbia.

*Link to a page in the sustainablog Green Choices product comparison engine.