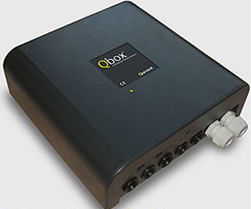 Editor’s note: Localized, distributed electricity grids are a hot topic in the renewable energy world. Today, Joel at Life Goggles takes a look at a product that could make such grids a reality at the neighborhood level. This post was originally published on Thursday, April 3, 2008.

Dutch company Qurrent is developing technology that will enable neighborhood-wide energy networks. Winner of the 2007 Picnic Green Challenge, the system will be used to pilot the concept in the Netherlands.

Because of fluctuating patterns of consumption, homes with wind and solar energy generators can find themselves with surplus energy at some times of the day, but not enough at others. Surplus energy typically gets sold back to the main grid, but as with most electric power transmission, ~30% of it can get lost along the way.

If a group of homes could work together to manage their collective energy generation and use so that higher levels of demand in one home can be matched with surpluses in others, this would help eliminate waste and make it more efficient. Participating homes essentially form a “mini-grid” that shares energy internally before exchanging any with the main grid.

To do this, a Qbox is installed in each house, connected to a central Qserver. This monitors the Qboxes in the network measuring energy flows in each home and optimizing them for maximum network-wide efficiency. It can also turn on devices such as washing machines and dryers so that they are run at the optimal time. A homeowner could tell their Qbox that they want their laundry done by 6pm and that it will take roughly 1.5 hours, for example. They can then go to work and the Qbox will decide when is the best time to run it, taking into account their production profiles and energy rates as well as those of their neighbors.

Sounds like a great idea although at peak times demand would still probably require energy to be drawn from the main grid.