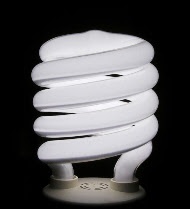 Jeff says: For the combination of price and efficiency, you can’t beat compact fluorescent lightbulbs. Yet, the do present an end-of-life challenge with the tiny amount of mercury present in the bulbs. Chris Baskind, editor at Lighter Footstep, and founder of the Vida Verde collective, has some tips for safe disposal of these bulbs once they burn out.

If you’re the sort of person who reads articles like this, you probably think pretty much everyone knows about CFLs (Compact Fluorescent Lightbulbs) by now.

Think again. Despite widespread availability and dramatically lower prices — name brand CFL bulbs go for about two dollars these days — CFL adoption in the United States remains around 6 percent. The rate is much higher in Europe and parts of Asia. Still, in the largest single consumer market in the world, CFL awareness remains in single digits. Contrast this with a recent survey suggesting up to 34 percent of all Americans believe in UFOs.

It’s not unreasonable to think that even fewer people know CFLs contain mercury. A small amount, sure: the National Electrical Manufacturers Association recently capped 25 watt CFLs at 5 milligrams per bulb. But as adoption rates rise, so does the importance of sending CFLs to a recycler, rather than the landfill.

Herein lies the problem. While retailers such as Wal-Mart and Home Depot have exhibited environmental leadership by bringing CFLs to market, they’ve been far less forthcoming in taking them back. CFLs can last three to five years under normal use, which means the vast majority of bulbs ever sold are still in service. By 2010, however, The U.S. could be looking at 80 to 100 million improperly disposed CFLs annually if people don’t know any better and convenient recycling isn’t available. That would represent an intolerable toxic burden to our current methods of waste disposal.

A issue of this size won’t be solved by individual action alone. But if each of us take the initiative to identify our local CFL recycling options now, we can start the process of educating friends and family before their efficient new CFLs are ready for disposal. Want to give it a try? Here are a few places to check:

Probably the best place to start is with whoever currently picks up your household trash or recyclables. If you pay for this service, you’ll almost certainly find a customer service number on your bill. Give them a call and ask if they offer CFL or mercury recycling. If not, politely suggest they do so. Here’s an opportunity to write a letter, attend a meeting, or take some other activist role in highlighting the importance of proper CFL disposal. The appropriate follow-up will depend on whether your trash service is privately or publicly held.

Whether or not local trash service is provided by a private contractor, your local municipality (city, county, or parish) is ultimately responsible for waste disposal.

Most phone directories have a “blue pages” directory of local government agencies. Try the listing for sanitation services. While curbside recycling is by no means universal, your area may have designated drop-off locations or periodic CFL collections. Should your local agency not have any CFL-specific provisions, ask about safe disposal of mercury or fluorescent tubes.
Retailers

Unless you bought CFLs from Ikea, one of the first major vendors to offer a free take-back program, you’re probably going to get some blank stares when you ask the manager of your local store about CFL recycling. It’s worth the effort, though: retailers need to know their customers want safe disposal of the goods they purchase. If you bought your CFLs from Wal-Mart, consider contacting their corporate headquarters and asking that they establish a company wide CFL return program.

Earth 911 is probably the United States and Canada’s largest online clearinghouse of recycling information. Visit their site and enter “CFL” and your Zip code in the “Find a Recycling Center” field at the top of each page. Alternately, try “mercury” and “fluorescent bulbs.” If there’s something in your region, it will almost certainly be listed. Earth 911 is currently attempting to expand its coverage to Europe, the first step toward an international registry of recycling options.

There are a variety of for-profit companies which provide CFL and fluorescent bulb disposal by mail. Failing a local option, these firms represent a responsible and environmentally friendly channel for CFL recycling. Lightbulbrecycling.com, for instance, will send you a handy, postage-paid plastic pail which will accommodate about 30 CFLs — more than most homes will use in many years. Just drop your spent CFLs in their well-engineered pail, and call FedEx for pick-up. The downside is that the service is quite expensive: about $120 per shipment. At today’s prices, this almost triples the unit price of your CFL. On the other hand, with the energy you’ll save with each bulb, you’re still ahead of the game. You’ll also know for sure that your CFLs are being recycled in a safe fashion.

What If All Else Fails?

If none of these options are available to you, there’s a backup plan: storage.

As their name suggests, Compact Fluorescent Lightbulbs don’t take up much room. Unless they’re broken or otherwise damaged, CFLs will hold their mercury more-or-less indefinitely. Rather than disposing of them with household trash, simply store expended CFLs until recycling is available in your area. A 5-gallon PVC bucket with sealable top can be scrounged from most construction sites or purchased new for less than ten dollars. It should safely contain a couple dozen bulbs. A sturdy cardboard box lined with a heavy plastic garbage bag should also do the trick. Just place your CFL storage container out of harm’s way so it won’t be dropped, crushed, or otherwise disturbed.

Once you’ve located CFL recycling near to home, let people know. Offer to take other people’s worn-out CFLs when you recycle your own; organize drop-off programs with churches, clubs, and civic groups; and get the word out about the necessity of safe CFL recycling.

Using less than 30 percent of the power required for a conventional bulb, CFLs represent a tremendous opportunity for energy savings. But they also require special handling if we’d like to keep them from becoming an environmental problem of their own. Feel free to reprint this article in any way. Email it to friends. Be part of the solution.

For information on the proper purchase and selection of CFLs, see the Complete Guide to Living with CFLs.