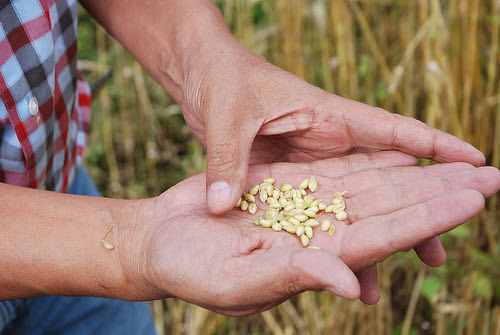 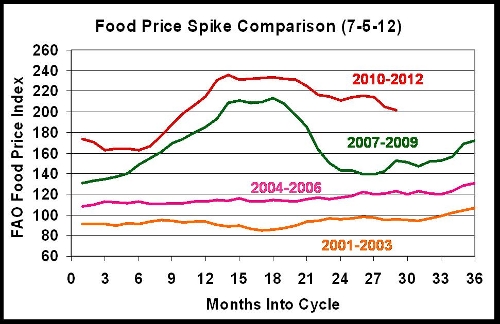 Yesterday, the Food and Agriculture Organization (FAO) of the United Nations released it’s monthly update on global food trade pricing.  The overall “Food Price Index” that combines all categories did decline slightly, but less than the previous month.  The index is still substantially higher than it was at a comparable period during the last cycle. 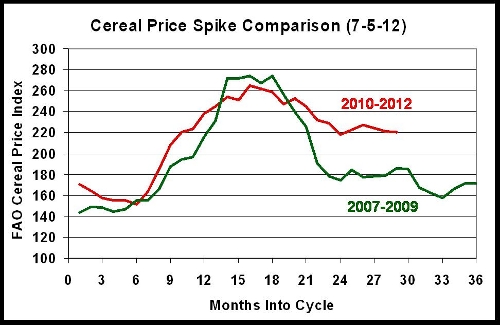 During June, the Cereal price index remained essentially flat, mirroring the trend from the previous cycle but at a new higher level.  There had been hopes that record grain planting for the 2012, US growing season would help to increase stores this fall and lead to significant price drops.  A troubling and spreading drought is developing in the American Midwest.  Without some timely rainfall during the key period of corn pollination there could be significant crop loss.  This possibility is  already leading to price increases for current and future US grains.  It is impossible to know yet whether this drought, and all the other weather extremes of this year, are the result of Climate Change.  Many climate experts believe that it is. 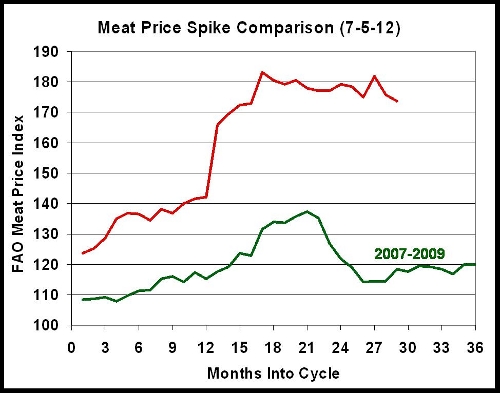 Meat prices increased dramatically in this cycle compared to the last one.  This is driven by increased demand from the huge new middle class populations in countries like China and India.  Meat prices are also linked to grain prices so it is no surprise that they remain unusually high 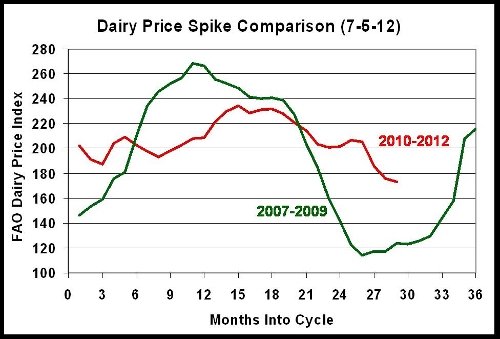 Dairy prices, which had shown two months of significant decline, continued to drop, but at a slower rate. 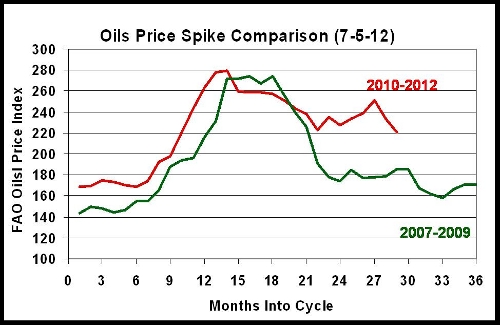 Oils were down for June, but that has only just now reversed an upward trend that began seven months ago. 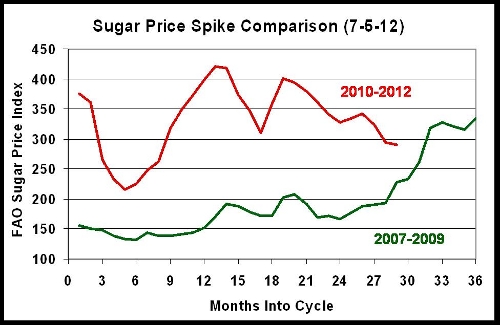 Sugar prices are not really linked to the same trends as the other commodities because tropical sugarcane production is less seasonal and much less tied to yearly planting decisions.

Last year at this time, I began pondering whether this second, unprecedented spike meant that the global food supply has entered a new paradigm.  For decades price cycles fit that old saying: “The best remedy for high food commodity prices is high food commodity prices.”  That meant that when prices went up, farmers would farm more or more intensively and inevitably produce enough new supply to bring the prices back down.  Farmers still respond the same way, but the effect of their efforts to produce more is having less impact.  Part of that is that global demand is higher than ever based both on population and standard of living.  Biofuels are a new part of the equation.  I also believe that we will be able to look back in a decade or two and say that Climate Change is indeed behind the heat, droughts, floods and pest increases that keep limiting production.  That is why I have argued that the “face of climate change” should not be polar bears.  It should be the poor families around the world that depend on global food trade and for whom these stubbornly high prices are a serious burden.

You are welcome to comment here and/or to email me at savage.sd@gmail.com