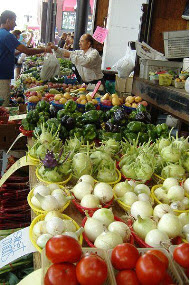 Wow, that sounds ominous! Rather, in Chicago, and around the Midwest, the local food trend in catching on, just as it has on the coasts. September will see numerous “eat local” challenges being hosted by a variety of organizations around the country, and the Windy City’s Green City Market will join in by sponsoring an eat local week beginning on the tenth.

That’s good news for locavores in the Chicago area, but, as the Chicago Tribune points out, the local food movement has taken hold around the state and region. That’s not only pointing to some healthy profits for farmers, but also signals a shift in how Americans related to the things they eat. According to the article,

“People are wanting to have some control in this world and this is a chance,” said Abby Mandel, founder of Chicago’s Green City Market. “They get to eat great-tasting, healthful food and save the environment and farmland. It’s a win-win and it’s something they can do.”

Sales of locally grown foods jumped to $5 billion in this past year from $4 billion in 2002, according to Package[d] Facts, the market research publisher. The number of farmers markets has grown dramatically too. Federal officials counted 4,385 markets in 2006; that’s up from 1,755 in 1994.

“Supporting local food and local farmers is one of the hottest trends in agriculture,” said Jim Slama, founder of Sustain, a non-profit environmental group that seeks to connect growers and consumers through a program called FamilyFarmed.org. “Consumers want to trust where their food is coming from.”

Of course, “local” is a bit of broad term, and in the Midwest, where long, cold winters are a fact of life, it’s often viewed a bit more broadly then in areas like Northern California. In the Bay Area, true “locavores” commit to a 100-mile diet: everything they eat must come from within a 100-mile radius. Chicagoans are a bit more flexible, so local can mean statewide, or even regionally.

The Illinois state government is also getting into the act:

The city of Chicago has also implemented a program called “Chicago: Eat Local Live Healthy” that is designed to “[create] a climate where the production and distribution of locally grown, healthy food is available, accessible and affordable to residents year-round.”

While globalized food production and distribution isn’t going anywhere soon, it’s encouraging to see so many people reconnecting with what’s on their plate. Our ability to disconnect ourselves from the sources of our food is a product of our prosperity: we can afford to buy goods from far-off places, and even have these items picked or slaughtered out of sight. That’s convenient; it also turns food, which is intimately connected with place, culture and community, into a mere commodity. When everything’s readily available, nothing’s particularly special. This has a tremendous environmental impact; it also takes away one element of our sense of self and community. I think you can see that where we buy our food: is it just me, or is a farmer’s market a much friendlier place than a supermarket?

We’re lucky in St. Louis: in addition to the Soulard Market, which is open year-round, there are numerous smaller farmers markets around town regularly, and a new store called Local Harvest Grocery opened recently south of Tower Grove Park. Are the farmer’s markets, co-ops and community-supported agriculture programs springing up in your neck of the woods? If you don’t know, make sure to check Local Harvest.

Image credit: Amy Mingo and Wikimedia Commons (and please note: this image is from a Minnesota farmers market. I went for the idea here…)