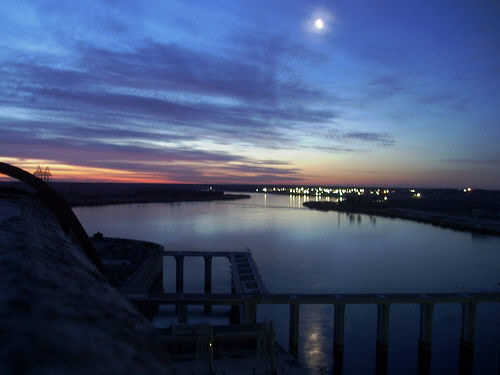 Editor’s note: Water, water everywhere… not exactly! As we’ve noted on a number of occasions, water issues loom just as large as some other environmental challenges currently facing us. Our friends at Low Impact Living have published a fascinating article on the subject, which we’ll present as a three-part series. Today’s post takes a look at the environmental impact of excessive water use; parts 2 and 3 will focus on how we use water in our homes, and how we can cut consumption without sacrificing quality of life. We’ll publish the last two part on Green Building Elements. If you can’t wait, visit LIL for the original publication of the article.

In the last few years, global warming has received all of the press. But shortages of fresh water are arguably the greater near-term environmental threat in many corners of the globe. In the Western United States, major die-offs of salmon have been attributed to too little clean water flowing downstream after cities and farms pulled out their allotments. In Australia, as much as 25%1 of farmland may soon be degraded due to water-related problems. And, many predict that future wars in the Mideast are as likely to be about water as they are to be about religion or energy.

Environmental Impacts of Excessive Water Use

Fresh water is at present a somewhat local commodity. Unlike some of the other environmental impacts we discuss on this website, such as petroleum use or global warming, water use in the United States primarily affects US residents (except for some limited overlaps with Mexico and Canada). This could easily change – the only thing that prevents the shipment of water over much larger distances is its weight and relatively low cost today compared to other commodities. And, in almost all other regions in the world, water supply issues are increasingly of international concern.

The United States uses, on average, about 345 billion gallons of fresh water per day. To put this in perspective, that is enough water to cover the state of Rhode Island to a depth of a foot – used every day. This use is broken down as shown in the chart at left.

This chart shows that water use for irrigation and for cooling electric power plants are tops among US water uses, at about 136 billion gallons a day. So, not only does using less electricity save you money and reduce global warming impacts, but it also protects our precious fresh water supplies.

Next on the list is public and domestic water supply of about 47 billion gallons a day, or about 165 gallons per person per day. This is the water we use while at work or at home.

What are the environmental impacts of using all of this water? They range from minimal to significant, depending on the location. In some areas, annual natural rainfall is sufficient for most years, whereas other areas must import most of their water via aqueducts even during the wettest of years.

The systems needed to procure, store and transmit water can have major environmental impacts. Many of these systems are already built, so a natural question is, how does cutting water use help? For one, many of the impacts below ARE directly correlated with use – reduce irrigation needs, and the amount of water consumed during the summer when habitat needs are also greatest decreases. And, reduced demand means that fewer new structures will be built and, some day, existing ones might be removed.

Dams: Dams often have multiple uses – while primarily for water storage, they are often used to provide flood protection and generate electricity as well. The environmental impacts are well-known: they present formidable obstacles to anything trying to move up or downstream, and have as a result decimated populations of fish such as salmon worldwide. Dams also change the ecosystem of a waterway by warming / cooling water and reducing sediment flows. This can eliminate populations of native fish and other aquatic animals.

Diversions: Diversions are structures built to convey water from places of plenty to places of scarcity. In the largest cases, they move water from one part of a state to another or across state lines, acting as man-made rivers. These structures are used throughout the West, carrying water from the mountains of Northern California to the dry cities of the South, and from the Colorado River to the states of the desert Southwest. The key impact of such structures is the quantity of water they remove from natural systems. As an example, water diversions from the Klamath River in Oregon and California during the summer have led to the deaths of thousands of salmon stuck in the shallow river while trying to migrate upstream.

Groundwater mining: Groundwater withdrawals represent almost 25% of the fresh water supply in the United States2. Groundwater is created by the infiltration of rain and other sources of water into the layers of sediment and rock below ground. There, groundwater either slowly flows downhill until it enters a river, lake or stream, or remains permanently underground in large natural basins.

When water is withdrawn from groundwater supplies at the same rate it is replaced by rain and other mechanisms, then groundwater basins are a sustainable water source. However, in many areas of the US groundwater is being withdrawn at rates far greater than what can be replaced by natural processes. These unsustainable withdrawals, often referred to as groundwater “mining,” have major environmental consequences. They can dry up the rivers and streams previously fed by the groundwater basins, destroying the ecosystems that depended on them.

Because groundwater in part supports the land above it, withdrawals can also cause land above to settle, called “subsidence.” In some areas of California, Texas and Arizona, the ground elevation has fallen by over 10 feet since the late 1940s3, damaging manmade structures and natural resources alike. The picture at right shows an area where the land surface has fallen by over 30 feet in less than 100 years.

Photo credit: nukeit1 at Flickr under a Creative Commons license