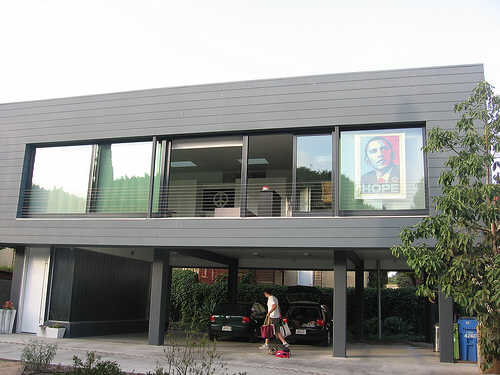 [social_buttons]If you’ve long longed to green your home but never felt you had the money to do so, get ready to take action. Obama’s new stimulus plan, signed into law last Tuesday, might give you just the extra financial nudge you need to undertake that eco-project you’ve had in mind.

First of all, the new stimulus plan will give you a tax credit for 30% of the costs, up to $1,500 total, for these eco-improvements on a property (via Associated Press):

In addition to tax breaks, the stimulus plan lets you get government rebates for buying Energy Star rated appliances.  About $300 million will be given out via these eco-rebates through state-run programs. Check with your state in the coming months to see how you can take advantage of these rebates.

Low-income households will also be able to get greenification help, thanks to the $5 billion going to the Weatherization Assistance Program (via LA Times). This existing but underfunded program’s aimed at helping low-income households make energy-efficiency improvements in their homes; more than 33.8 million households are eligible for weatherization services according to the Department of Energy stats. So — If your income’s less than 50% above the poverty level, make sure you’re signed up to get on the waiting list in your state for this eco program, which could reduce your annual gas heating bill by almost a third.

Wealthier people can also get some financial help — though the economic boost isn’t tied to enviro-leanings. According to the Associated Press, the biggest winners from this stimulus bill could be “Americans with more expensive homes who will be able to refinance their home loans at cheaper rates.”

Why? The stimulus bill “temporarily raises the maximum size of mortgages that government-sponsored mortgage companies Fannie Mae and Freddie Mac can purchase and market as securities from $417,000 to as high as $729,750 in expensive parts of the country such as New York and California,” says the AP. The bill also “makes a similar change for loans backed by the Federal Housing Administration.”

What this basically means is that homeowners will be able mortgage or remortgage their houses at much more favorable interest rates. Plus, through a separate tax break in the stimulus plan, first-time homebuyers will get an $8,000 tax credit, so long as they buy their homes before Dec. 1.

All that’s to say that many homeowners will be able to save a lot of money — which can be put toward greening projects — which can also earn their own tax credits and rebates!

That’s already a lot of good green news, but homeowners could see additional eco and economical benefits from the stimulus bill. Since the bill’s aimed at creating a lot more green jobs, from training people to make wind turbines and solar panels to promoting energy efficiency in schools and government buildings, we’ll hopefully all see some savings result from the expanding market for energy-efficient products and services.