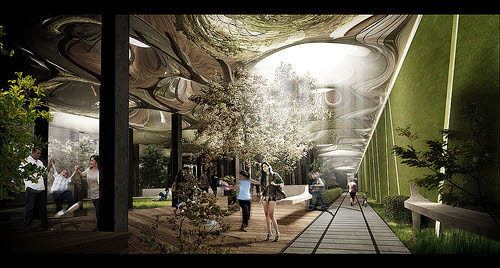 There have been many ideas put forth in recent years, on to how to become more green, more sustainable and make our world a more human-centered place. In big cities such as New York City, there are only so many options available, as the city is much too large to retrofit entirely.

People are making personal choices to be more green and sustainable – purchasing things like solar garage doors and locally produced food – but the issue of green space is not something that individuals can really tackle on their own. And really, in a huge metropolis, where would you even add green space in New York?

Dan Barasch and James Ramsey took a cue from the High Line, a reclamation of an old above ground line that had been changed into a park. Taking it a step further they proposed an underground park in the long abandoned underground trolley station under Delancey street.

They envision an underground park that uses innovative solar technology to create the illusion of natural sunlight in what is otherwise a dark, damp underground environment.

The illusion of natural sunlight is so convincing that even plants would be able to grow in this underground environment. The system works by using a fiber optic system to collect and concentrate sunlight above ground and transmits this light below ground, creating a natural glow and feel of real sunlight.

There are barriers to this project. The biggest one is that the Delancey underground is owned by the city transit authority and they are looking to rezone the space for commercialization. This will require Barasch, Ramsey and their supporters to show how the underground park could help to revitalize the city and actually provide a revenue stream that the city so desperately needs.

Tourism is a big industry in the city, and some believe that this could be a major draw for folks around the nation – as well as those who live in the city.

While this is just a dream, it is a great illustration of how innovative thought can show us how to utilize previously abandoned spaces for an alternative use. Especially in areas where green spaces are at a premium, ideas such as this are ways to provide people with tranquil green spaces, while maximizing one’s use of space.

There are many such abandoned areas across the country – rail stations, buildings, etc. – which could be refurbished to great a bastion of green in the concrete jungle.

Do you think an underground park would benefit New York City?