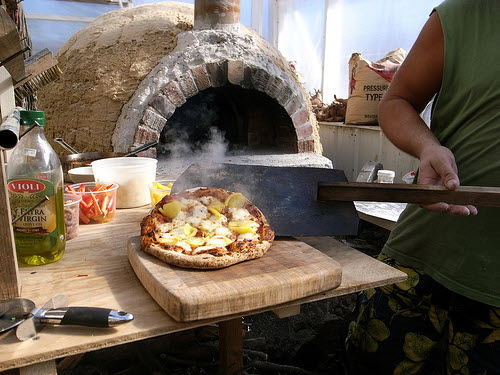 I know for a fact that there are many people out there entranced with the concept of a cob pizza oven in their backyard: Ziggy’s post from early 2010 has been a mainstay of our top 10 traffic drivers since we published it. I don’t know, though, how many people have actually tried the project – I’m guessing not many. Yes, it’s very cool, but even detailed instructions and pictures are no substitute for hands-on training… right?

Well, now you’ve got no excuses: Ziggy and his partner April will be holding a live cob oven workshop (actually, four of them) in the Fall of 2013. Like the timber framing and straw bale building workshops they sponsored last year, these will take place at the Dancing Rabbit Ecovillage. For $200 (or $225 if you register within 30 days of the workshop), you’ll get intensive training on building an oven, as well as three meals a day, access to indoor showers, and camping space. The reaction to previous workshops has been really positive, so I hear…

If you’ve built your own cob oven, tell us about it. If not, and you want to do so, consider attending one of these workshops – ought to be a great time!

Image credit: The Year of Mud via photopin cc