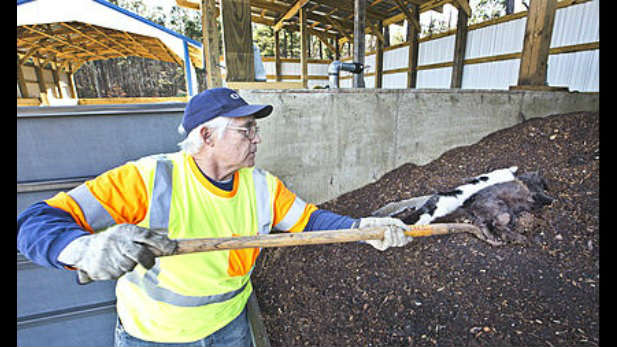 Animals die. Sometimes from means that we argue over – slaughter for meat, hunting – sometimes from natural causes, and sometimes from accidents. If you’ve ever hit an animal with your car, you know you probably felt just sick afterwards (and, depending on the animal, may have had significant damage done to your vehicle). You probably didn’t deal with the animal’s carcass, though (unless you’re one of those folks who eats roadkill) – you probably left it where it was, figuring nature or the government agency responsible for road maintenance would handle it. Those agencies do handle animal carcasses on the side of the road… and, from just a bit of Googling, it looks like composting has become a popular method.

The video above demonstrates how to make compost from dead animals – Virginia’s Daily Press shares a brief overview of how the state’s Department of Transportation deals with roadkill at its composting center in Windsor. They don’t share how the compost is used, but I’d guess that plants and landscaping at public sites gets at least a portion of its nutrition from animals killed on state roadways.

No doubt that this is a environmentally preferable alternative for dealing with dead animals – putting them in landfills just contributes to overuse of that space and methane production, and burning them takes up fuel without any kind of return. At the same time, it’s not something that just anyone with a backyard compost bin can do – your small-scale compost operation isn’t able to handle the pathogens created, and I’m sure it would take a really long time. But larger-scale operations dedicated to this practice make a lot of sense.

Need more detailed information? Cornell’s Department of Crop & Soil Sciences has a ton of good information on composting, including dead animals… check it out. If this is a practice with which you’re familiar, or have some experience, chime in…