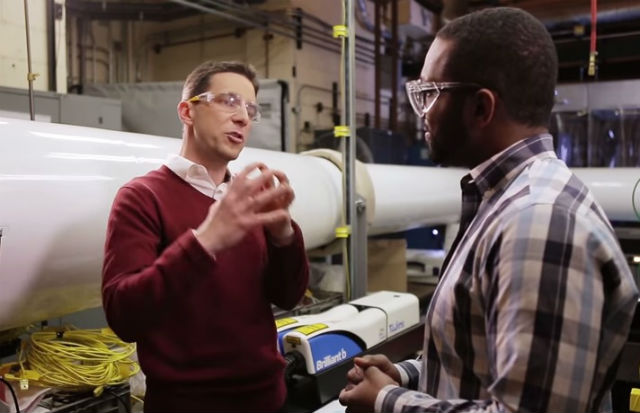 I’ll be taking a flight later this week, and, as with every time I get into a plane, I’ll wonder at some point “So, how do you get all of this metal and mechanical fluid and luggage and people and stuff into the air?” (probably not in a panic, but that’s never guaranteed, either). While I guess I’ve got a basic handle on the physics of lift, I definitely know it takes a lot of energy to put all of that mass into flight. Still, we hear about more efficient jet engines and planes, so I’m back to my original musings: how does all of this work? How do you cut the amount of energy needed, and still make sure this thing gets off the ground?

GE knows jet engines (among other technologies), and, it turns out, they know how to explain them to someone (say, like me) who isn’t an engineer or physicist. Their GE Masterclass series on Youtube brings in comedian and author Baratunde Thurston to discuss questions just like “How does a jet engine work?” and “How can you make that engine run more efficiently?” with the scientists that create this technology. Check it out:

Pretty simple, huh? Now that you’ve got that question answered, you can move on to others. If, among them, are questions like “How does a locomotive work?” or “How does a wind turbine produce electricity?” you’re in luck: the Masterclass series also has videos on these topics. Each of these technologies also has an “extra credit” video, also, to give you just a bit more information (or what we from Louisiana would call “lagniappe,” or “a little something extra”).

The Masterclass videos are just one series of several that GE has running on its Youtube channel. Keep up with new episodes by subscribing… and let us know what GE technology you’d like to learn more about.