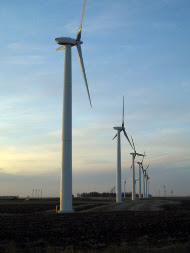 Jeff says: Maria Surma Manka is the publisher of Maria Energia (and, of course, a writer at GO). I’ve enjoyed Maria’s work from the beginning, and am pleased to publish one of her posts as the first offering from the Vida Verde collective on sustainablog.

I recently worked for an energy policy organization in Minnesota, and my colleagues and I worked to get a renewable energy standard passed there. We touted the economic benefits it would bring: the investment in clean technologies, the strengthening of rural economies, innovation, entrepreneurship, and the possibility of the state becoming a clean energy exporter. All this, in addition to cutting global warming emissions, made a renewable energy standard a no-brainer, and it passed – after many years of debate – with flying colors this past February.

But has an RES really changed the landscape of Minnesota and the 24 other states with a similar policy? The U.S. Public Interest Research Group (USPIRG) looked into it and found that huge strides have been made in states that have implemented a renewable energy standard. In fact, all 25 states are reducing emissions, creating jobs, and fueling a clean energy economy.

Reaping the Rewards found that in 2006, more than 66 percent of the nation’s renewable energy was expected to built in states with an RES. In 2007, that number jumped to 70 percent. Clearly, cleantech businesses and investment are going where the rules of the game are clear, the regulatory support is strong, and the state’s economy is open for business.

The global warming impacts are huge as well: RES states will cut emissions by a total of 8.4 million metric tons per year – that’s like taking more than 1.5 million cars off the road. About 1.2 billion gallons of water will be saved because of the decreased reliance on fossil fuels.

Texas has seen some of the greatest impacts of an RES. Besides adding 2,000 megawatts of renewable energy, Texas landowners receive about $9.5 million in royalty payments from wind farm operators.

Now that we can prove the positive, local effects of an RES, it’s time for a national renewable energy standard. The House took a step this year when it passed a measure calling for 15 percent renewable energy, but the Senate to follow suit right away. A coherent national policy will help drive America to forefront of the burgeoning cleantech market at a time when the rest of the world is already clamoring to get there.