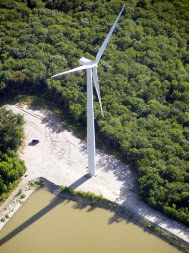 Thought I’d step outside of the Midwest tonight for a look at a great story from the Northeast. I’ve noted before that the ski industry around the world is taking a hard hit from climate change. This, coupled with the green bent of many skiers and snowboarders, has led numerous ski resorts around the country to begin purchasing renewable energy. The Jiminy Peak Mountain Resort in Hancock, Massachusetts, has upped the ante, though: they’ve purchased their own wind turbine, at the hefty price of $3.9 million.

This is a lot of money to buy green cred, but, ultimately, the decision to make such a large investment came down to the bottom line: electricity prices rose by 50% in the 2005-06 ski season, but 7% less skiers came to Jiminy Peak last winter because of warm weather. To help offset the cost of the turbine, the resort will sell part of the electricity generated to local residents. According to the Boston Globe,

By using half of the energy to help power the resort and the other half to power local residences and businesses, Jiminy Peak hopes to receive $138,000 in renewable energy credits and $161,000 for the energy sold to outside consumers in each of the next 10 years. At the resort, windmill-generated energy will replace a third of that produced by oil, coal, or natural gas, powering ski lifts and snow-making machines

It gets even better. The resort’s website notes that it its need for electricity peaks at the same time that area winds are the most reliable: in the winter. According to Jiminy Peak’s renewable energy page on it’s website:

A business case for installing renewable technology? You bet. And when one figures in a $582,000 grant from the Massachusetts Technology Collaborative, and the $300,000 the resort will make annually from the sale of electricity and renewable energy credits over the next ten years, the cost drops to just over $300,00, plus interest on the loan. There are also the reduced electricity bills. While this level of investment isn’t feasible for every business, in this case it seems like a no-brainer.

It’s easy to focus on the high costs of renewable technology, but, as this example shows, the benefits of clean energy aren’t just environmental: they also create economic opportunity. Jiminy Park can not only breathe a little easier about its energy costs… it may also attract a few more skiers next season who respect that “green cred” the resort has purchased.