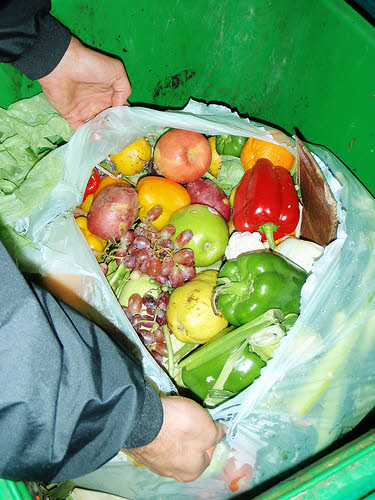 I was intrigued by this couple after they appeared on Oprah Wednesday, February 27. I know it’s been over a week. Did you really think I caught the episode on Oprah? I heard about this from a friend who never misses the show. Honestly! OK, I watch it sometimes.

Daniel Burt is an eye doctor and his wife Amanda is a civil engineer living in Nashville. Their hobbies include living a lifestyle that makes a statement against rampant overconsumption and wastefulness in America. In other words, they dive in dumpsters to redeem things that have been thrown away.

Daniel explains, “We try to live very simply, and we don’t spend a lot on ourselves. We are very happy with having a little. We like to make it a priority to share a lot of our money. A lot of that comes from our Christian values of sharing and generosity.”

Amanda tells why donating their surplus discoveries to people in need is also helpful to the planet. “We just put it back into the system rather than into a landfill,” she says.

Their blog gives a more detailed account of the beliefs and values behind their “freegan” lifestyle. Daniel says that Americans represent 5% of the world’s population, but they use 30% of the world’s resources.

In part 2 of his 3-part series of blog posts explaining why two professionals would take part in such an unusual lifetyle, Daniel sums it up this way:

We recycle and dumpster dive because we care about God’s earth and its inhabitants, and we believe that consuming and wasting too much of the planet’s resources is destroying both. It’s time we started loving our neighbors by shredding our credit cards and treading lightly on the earth…somewhere other than a shopping mall.

The couple believes that freeganism goes beyond recovering usable “waste” from ending up in the landfill. It is a lifestyle that begs the question, “Why do we have so much waste in the first place?”

To try to take the edge off the ick factor, the Burts make it clear that they aren’t trying to tell everyone they should go do a swan dive into the nearest dumpster. What they hope to do is help people begin to come up with creative ways of living less wasteful and less consumptive lifestyles.

So what do you think, Green Options Nation? Would you snatch perfectly good items out of a corporate dumpster that would otherwise be headed for the landfill, even if it meant getting a little dirty?