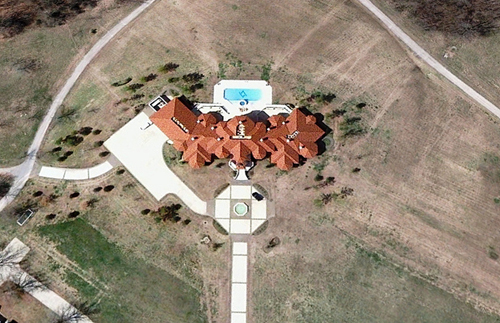 For some reason, having an utterly bloated, massive “home” still appeals to some class of individuals. Mansions, they may call them, but they look and sound more like hugely oversized hotels and fortresses than anything else.

The Wall Street Journal has a feature on some of the latest mega mansions built by the armies of the ultra-wealthy. Now that you’ve seen beautiful, personal, and ecological tiny houses, feast your eyes on the exact extreme opposite: the massive, 25-50,000 square foot funnels of energy and resources that they call mansions of the modern day.

Hedge-fund manager Cliff Asness is building a 25,900-square-foot, Colonial-style home with an indoor swimming pool and tennis court in Greenwich, Conn., according to permits and other town records. Nearby, a 31,500-square-foot mansion is being built for Lee Weinstein, founder of data-center concern Xand, with 15 bathrooms (plus additional powder rooms), a 2,500-square-foot master suite and a basement with a theater, wine cellar, juice bar, dance studio and sauna, records show. Twenty miles away, in Westport, Conn., Melissa and Doug Bernstein, whose Melissa & Doug company makes educational children’s toys, are creating a compound of more than 30,000 square feet with a stand-alone ice-cream parlor, plans show. The main house alone is 29,500 square feet and includes a gym partially covered by glass; there’s also a guest cottage, pool cabana and rec-room-and-garage building.

It’s hard to know what to say about all of this, other than: wow. What a phenomenal waste of resources and energy (not to mention, money). It’s actually embarrassing just to know that stuff like this exists in the world.

Need I mention all of the energy needed to maintain, heat, and cool a structure such as this, in addition to all of the other resources that get sucked up in the process?

And by the way, I doubt there is anything home-like about these 30,000+ square foot buildings! Sustainable, this is not.