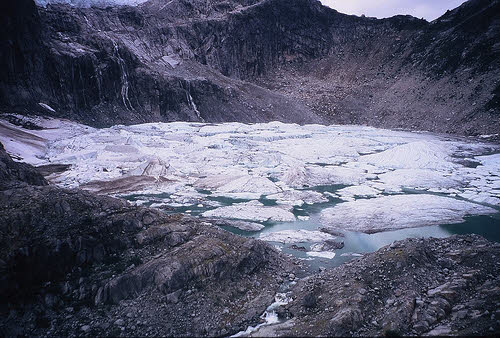 As the earth warms, glaciers and ice sheets are melting and seas are rising. Over the last century, the global average sea level rose by 17 centimeters (7 inches). This century, as waters warm and ice continues to melt, seas are projected to rise nearly 2 meters (6 feet), inundating coastal cities worldwide, such as New York, London, and Cairo. Melting sea ice, ice sheets, and mountain glaciers are a clear sign of our changing climate. In September 2012, sea ice in the Arctic Ocean shrank to a record low extent and volume. The region has warmed 2 degrees Celsius (3.6 degrees Fahrenheit) since the 1960s—twice as much as lower latitudes. With less snow and ice to reflect the sun’s rays and with more exposed ocean to absorb heat, a vicious cycle leads to even warmer temperatures. Thinner ice combined with rising temperatures makes it increasingly difficult for the sea ice to recover. The historically ever-present white cap at the top of the globe could disappear entirely during the summer within two decades.

The Arctic plays a pivotal role in large-scale weather patterns. The stark contrast between cold air at the North Pole and warmer air in the temperate zone drives the jet stream over North America, Europe, and Russia. As the Arctic continues to warm faster than the rest of the globe, this contrast diminishes. This can change the path of the jet stream and slow it down, leaving weather systems in the same place for a longer time. A rainy spell that sticks around can turn into flooding, while a sunny spell can turn into a drought.

Warming in the Arctic is particularly important because of its effects on Greenland’s enormous ice sheet. Greenland’s ice loss has accelerated from 51 billion tons per year in the 1990s to 263 billion tons per year today. In July 2012, an iceberg twice the size of the island of Manhattan calved off Petermann glacier in northwestern Greenland. This was the second large calving event off this glacier in just two years: the iceberg that broke away in August 2010 was twice as large.

While Greenland’s ice loss is astonishing, on the other side of the globe, parts of Antarctica’s vast ice sheet may be even less stable. The continent is flanked by 54 major ice shelves, which act as brakes slowing the movement of ice in land-based glaciers out to sea. Twenty of them show signs of thinning and weakening, which translates into accelerated ice loss. After the 3,250-square-kilometer Larsen B Ice Shelf collapsed in 2002, for instance, the glaciers it was bracing flowed up to eight times faster than before. The most dramatic thinning is in West Antarctica.

Pine Island glacier, which flows into the Amundsen Sea, is one of the main outlets for West Antarctic ice. A rift now stretches 29 kilometers across the glacier’s ice shelf, threatening to release an iceberg 14 times the size of Manhattan. Warm deep ocean water has penetrated beneath it, causing an astounding rate of retreat. In the past 20 years, the grounding line where the bottom of the glacier meets the ocean retreated by 25 kilometers, whereas over the previous 10,000 years it only moved back by 90 kilometers.

The movement of land-based ice to the ocean raises sea level. Together the West Antarctic and Greenland ice sheets contain enough ice to raise seas by 12 meters, if they disintegrate entirely. Just a one-meter rise—well within the projections for this century—would flood half of the riceland in Bangladesh and much of the Mekong Delta in Viet Nam, two countries that are leading rice producers.

Next: Inland mountain glaciers are also melting at alarming rates