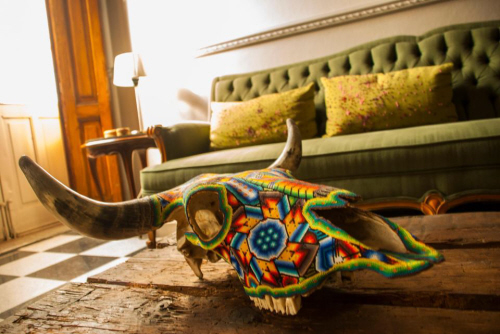 On our recent visit to Mexico City my friend and I noticed the muy rico smells of the various food carts and stands, the bustling traffic and colorful architecture. Regrettably, we also noticed the pollution. In a city of more than 20 million people, one would think that sustainability would be more of consideration. Fortunately, one B & B has taken the initiative to create a sustainable environment for visitors wishing to make a greener visit to DF.

El Patio 77 opened in November 2009 after four months of renovations, but the history goes back to 1890 when the building stood as a typing school for women. It then changed into an office building, later a multi-family home, and even at one point it sat abandoned. It represents one of the oldest buildings in the neighborhood.

The young owners (Alan V Favero and Diego Le Provost) repurposed the building into a tranquil B & B in colonial San Rafael. Part of “green building” philosophy goes into utilizing the existing building. In El Patio 77 they left much of the building intact. The elegant wood staircase represents one of the mainstays that have survived the since the building’s inception, as is the exposed brick on the ceilings and walls.

Don’t think that just because the owners have a philosophy to maintain and repurpose the old that they have not added modern sustainable technology. With fresh water being such a vital issue in the city, the El Patio 77 contains a modern greywater system called the SIRDO (designed by Arquitecta Josefina Mena). The “alive” water system contains a filter system that requires monitoring. In being used two times, the B & B recycles the water into the toilets and cleaning water. During the rainy season (June-October) they use only treated water for toilets and cleaning, and during the dry months the water alternates between treated and regular city water. In keeping with their clean water mantra, they request guests to use the provided natural shampoo and soap and to not dispose of toilet paper in the toilet. 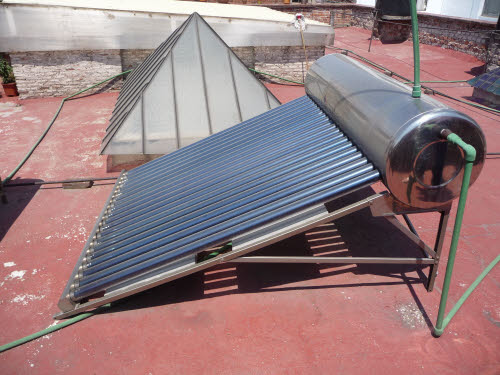 On the rooftop, the solar hot water system works in harmony with the grey water system. With Mexico City living on borrowed time with non renewable and polluting energy Mr. Favero believes, “The solar hot water system is necessary because we don’t have resources anymore. It’s a must.” The system produces 80 percent of the energy needed to heat the water while the rainy season the solar system creates 50 percent of the energy.

El Patio 77 uses 30 percent LED lighting and the remainder CFL. Adding the costly (especially in Mexico) LED lights to the entire building represents their next major investment toward full sustainability.

In addition to big ticket items, 80 percent of the shabby chic furniture comes via recycling, restoration or gifts. Only the beds and tables are new with the breakfast tables being made of certified wood.

Much of the sustainable philosophy not only comes from green energy but supporting local community as well. The bathroom tiles and lamps come from Mexico and the wood floors com via local cooperatives.

The owners and staff promote local artisans (we love the locally made chicken bowl) with in-house gallery shows, as well as local walking tours and bike rentals. As we basked in the natural skylight in the breakfast room dining sipping the local organic coffee we couldn’t help but feel good about our stay. Not only because El Patio 77 represents a tranquil hideaway in bustling Mexico City but we felt that it represented the right thing to do.