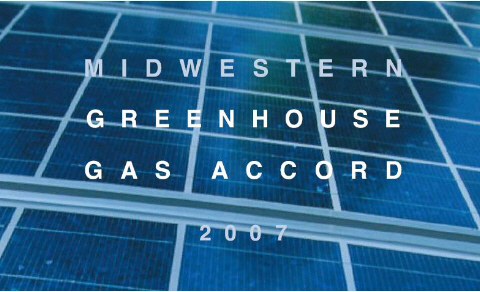 I’m a few days late on this one, although the green blogosphere in general has been quiet on this news (thank you Grist, Sightline Institute, and It’s Getting Hot in Here!): on Thursday in Milwaukee, governors from nine Midwestern states and the Canadian province of Manitoba signed the Midwest Regional Greenhouse Gas Reduction Accord. Based on similar agreements in the Northeast and West Coast, the accord commits seven of the signatories to creating a regional cap-and-trade system for greenhouse gases by 2010 (Ohio, Indiana, and South Dakota signed on as observers); it does not yet establish a reduction goal (as Grist notes).

While this is accord is only a first step, there’s a lot to celebrate here. Politically, the Midwest is pretty purple: cities tend to be bright blue, while rural areas are fiery red. Culturally, it’s fairly conservative overall: the “Heartland” has meanings beyond geographical location. If governors from both political parties (and the event surrounding the signing was co-hosted by Wisconsin’s Democratic governor Jim Doyle, and Minnesota’s Republican governor Tim Pawlenty) are willing to spend political capital in such a manner, that’s a strong sign that the polls aren’t wrong: the desire to address climate change has reached the mainstream.

Of course, the particular approach the accord takes should appeal across the political divide: the press release from the Midwestern Governors Association highlights a “market-based and multi-sector cap-and-trade mechanism,” and Governor Doyle’s proclamation that the Midwest has the resources to become “the Saudi Arabia of renewable energy.” Nary a word about carbon taxes, renewable energy standards or development regulations. I’m not criticizing the accord for its “free market” language, as I think that’s necessary for broad appeal. At the same time, I’m guessing that making such agreements work will require both public and private action, and government regulation (or, at least, government incentives) will be a part of the mix. We’ll also have to keep an eye of what kind of renewable energy development receives priority placement: if corn-based ethanol remains a synonym for “renewable energy,” we’ve got further to go than this agreement would suggest.

As you might imagine, I’m very disappointed to see that my home state of Missouri isn’t a part of this agreement. The Governor’s office didn’t release a statement on the agreement, and my cursory searches of the Post-Dispatch and the Kansas City Star came up empty… not even an article, much less an editorial. “Show Me” arguments won’t cut it here — Missouri is taking steps in the right direction, but we’re still behind the curve. This won’t just cost us environmentally, but also economically: why not involve the state in an agreement that could create new economic opportunities for businesses, and new “green collar” jobs? I’m mystified… but I’ll keep asking… And, hopefully, the signatory states that border Missouri (Kansas, Illinois and Iowa) will “show us” that this is a smart move.

UPDATE: This morning (11/20), the Post-Dispatch weighed in on Missouri’s total lack of participation in the Greenhouse Gas Reduction Accord: apparently, the governor didn’t even send a representative to the meeting in Milwaukee.

Pioneer Press: Getting into the Green Groove