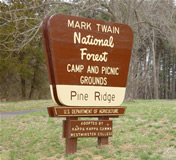 I heard about this on our local NPR affiliate the other day, and meant to get it up here and at the FIR Project blog (which seems to be encountering technical problems) earlier… so much news, so little time… Missouri’s Attorney General Jay Nixon is formal objecting to the sale of land in the Mark Twain National Forest to pay for rural education funding:

Attorney General Jay Nixon today filed his formal objection to a proposal by the U.S. Forest Service to sell more than 21,000 acres of the Mark Twain National Forest in Missouri. Nixon’s letter, the first substantive comments filed on behalf of the state of Missouri, outlined his objections in detail and also stated that the Attorney General was evaluating “all legal options available” to protect Missouri’s interests.

The National Forest Land Conveyance for Rural Communities Act, proposed by the Bush Administration, gives the Forest Service the authority to sell more than 300,000 acres of national forest nationwide. Proceeds from the sales would go to fund schools in states and counties affected by a decreased timber harvest on federal lands.

“Attorneys with my Agriculture and Environment Division have been poring over this proposal, and it’s important that specific, detailed objections be raised to stop this short-sighted plan,” Nixon said.

Nixon wrote the proposal is a “myopic approach to forest management and education” and that Missouri would lose proportionately more forest land and gain less financial benefit than most of the states impacted. In exchange for the sale of 21,000 acres of national forest in Missouri (fourth highest among the 34 states impacted), the President’s budget calls for Missouri to receive an allocation of only $2.7 million — less than 13 other states.

“The current proposal unnecessarily and unwisely pits our public schools against our national forests,” Nixon wrote to Mark Rey, Undersecretary for Natural Resources and Environment for the U.S. Department of Agriculture. “The Administration has a duty to propose a means to adequately fund our public schools. But the Administration also has a duty, no less important, to protect and preserve our national forests. While I support funding for rural schools, I oppose the plan to sell our forests.”

Nixon wrote the plan also is objectionable because “it does not require the (Forest) Service to take a hard look at the environmental impacts in compliance with the National Environmental Policy Act (NEPA). This important law is designed to help ensure that agencies make informed decisions about public trust lands and should not be lightly set aside.”

The current proposal is an attempt to evade NEPA requirements that an environmental impact statement or, at minimum, an environmental assessment be performed to consider the potential effects of the government’s plan, a memo prepared by Nixon’s Agriculture and Environment Division states. The proposed legislation specifically exempts the Forest Service from NEPA compliance by making the sales of these lands categorically excluded from NEPA. “In effect, the proposed legislation gives the Forest Service carte blanche to ignore the environmental impact of selling forest lands,” the memo states.

In discussing our plan to help publicize this proposal, my fellow FIR partners and I never considered approaching state AG offices, but, now, that seems like an oversight. Hopefully Nixon’s action will encourage other attorneys general to follow suit. I’ve voted for Nixon twice now, and am glad to see the voters’ trust repaid in this way.